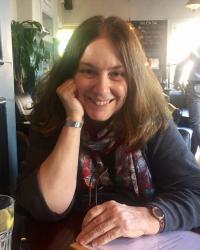 I am an historian of the European Middle Ages focusing particularly on Ireland, Wales, and England from the Iron Age through the thirteenth century, and I have been at the University of Washington since 1988. I hold graduate degrees from Yale and Oxford, and my particular academic interest is law, especially the vernacular laws of Ireland and Wales. Over the years, my research has come to center on three main issues within the field of medieval Irish and Welsh law: legal education, law and its relationship to language (particularly the vernacular), and the literary aspects of legal writing. I have also written on the subject of women in the medieval period, and have recently begun teaching and publishing as well on the mythology of J.R.R. Tolkien. My regular lecture class rotation features courses on the early and high middle ages, Celtic civilizations, medieval women, and Tolkien, and I have taught undergraduate seminars in these and other fields, including law, heresy, sanctity, and kingship. In addition to my appointment in History, I am an Adjunct Professor in the Gender, Women, and Sexuality Studies department; I have also worked frequently with graduate students from English and Comparative Literatures.

My first book, The Road to Judgment: From Custom to Court in Medieval Ireland and Wales (Univ. of Pennsylvania Press, 1994), examined the Irish and Welsh institution of personal suretyship, situating it in its appropriate social context and tracing the integration of such "private law" enforcing mechanisms into the emergent court system of the high middle ages. My second book, Dark Speech: The Performance of Law in Early Ireland (Univ. of Pennsylvania Press, 2007), focused on the role played by speech and performance in ensuring social order in early medieval Ireland. My current book project, Law and the Imagination in Medieval Wales, examines the literary and political aspects of the Welsh lawbooks, arguing that they are best read not as objective (if idealized) records of native custom but, rather, as important and often humorous commentaries on thirteenth-century Welsh politics. In addition, I am the author of more than twenty articles on a variety of subjects pertaining to medieval Ireland, Wales, and England, including divorce, law and memory, riddles, and legal education. My research has been supported over the years by grants from the Guggenheim Foundation, the American Council of Learned Societies, All Souls College Oxford, and the Dublin Institute for Advanced Studies; my books have received prizes from the Medieval Academy of America, the American Conference for Irish Studies, and the Board of Celtic Studies of the University of Wales.

I am a Past President of the Celtic Studies Association of North America, have served on the Board of Directors of the American Society for Legal History, and am a past Councillor and Executive Board member of the Medieval Academy of America. I serve on several editorial boards, including Law and History Review, the Celtic Studies Association of North America Yearbook, and Welsh History Review, and am a past winner of the Distinguished Teaching Award at UW.

One of the fields available to those interested in the history of medieval Europe is "Early Medieval Europe." This field is generally defined as covering western Europe in the period c. 400-1000. (Often students begin their course of study before 400 or end it after 1000: the chronology given here represents a general guideline rather than a universal requirement.) Students preparing an early medieval field will be asked to prepare reading lists (usually done after taking a field course with the instructor) in three or four "subfields." Two of these subfields are normally "Kingship" and "The Church," although the manner in which students approach these topics varies according to the needs of the student involved. Some students may choose, for example, to focus on the institutional aspects of both king and church; others may concentrate instead on issues of ideology and representation. All such matters are worked out individually with the instructor in accordance with the needs of the student.

In addition to these subfields, students are asked to prepare one or two other subjects for testing. These are defined according to individual preference. Some students choose to focus on chronological or geographical topics (e.g. the Anglo-Saxons, the Viking Age), while some prefer thematic topics (e.g. law, women, sanctity, historiography, urban life, vernacular literatures, etc.). Again, all such decisions are made by the student in consultation with the instructor. Reading lists approved by both student and instructor then serve as the basis for the written (M.A.) or written and oral (Ph.D.) field exam.

Most field exam reading lists include secondary sources only. A knowledge of the basic primary sources of the period is presumed, but is not generally tested at the exam. Students doing a medieval field might expect that some of their reading will be in foreign languages (usually French or German). However, this is not always the case, and there is no foreign language requirement for completion of the field.