Dark Speech: The Performance of Law in Early Ireland 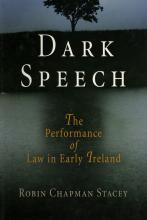 What does it mean to talk about law as theater, to speak about the "performance" of transactions as mundane as the sale of a pig or as agonizing as receiving compensation for a dead kinsman? In Dark Speech, Robin Chapman Stacey explores such questions by examining the interaction between performance and law in Ireland between the seventh and ninth centuries.

Exposing the inner workings of the Irish legal system, Stacey examines the manner in which publicly enacted words and silences were used to construct legal and political relationships in a society where traditional hierarchies were very much in flux.

Law in early Ireland was a verbal art, grounded as much in aesthetics as in the enforcement of communal norms. In contrast with modern law, no sharp distinction existed between art and politics. Visualizing legal events through the lens of procedure, Stacey helps readers recognize the creative, fluid, and inherently risky nature of these same events.

While many historians have long realized the mnemonic value of legal drama to the small, principally nonliterate societies of the early Middle Ages, Stacey argues that the appeal to social memory is but one aspect of the role played by performance in early law. In fact, legal performance (like other more easily recognized forms of verbal art) created and transformed as much as it recorded.

Winner of the 2007 James S. Donnelly, Sr., Prize for Books on History and Social Sciences from the American Conference for Irish Studies.