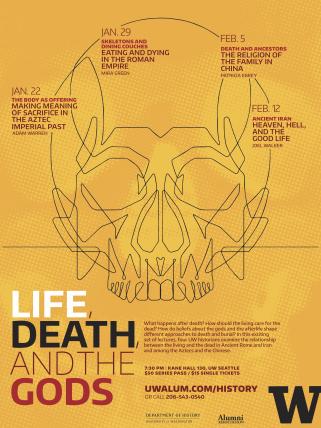 The winter History Lecture Series is a highlight of the academic year in the Department of History. We are pleased to announce that tickets for this year's series, Life, Death, and the Gods, will be for sale from the UW Alumni Association now.

What happens after death? How should the living care for the dead? How do beliefs about the gods and the afterlife shape different approaches to death and burial? The 2020 History Lecture Series will consider answers people in the past have given to these questions, featuring Department of History faculty with specialties in late antiquity and the early modern world and whose expertise together spans the globe.

The series will begin January 22nd with a talk from Professor Adam Warren on the histories and myths around the practice of human sacrifice in the Aztec Empire. Why might a society embrace human sacrifice and how did the stories of witnesses come to influence Spanish colonization in Central America? On January 29th, Dr. Mira Green will give a talk on the intertwining of food and death in the Roman Empire and portraits of its decadence after the empire’s fall. Next, Professor Patricia Ebrey will give a lecture on February 5th about practices of communicating with the dead in ancient China. The activities of these long-dead Chinese elites, Ebrey will share, went on to influence everyday life for people in China for centuries. Finally, Professor Joel Walker will close out the series on February 12th with a discussion of Zoroastrianism in ancient Iran, a religion with a long history and profoundly influential view of the afterlife.