We Became Mexican American: How Our Immigrant Family Survived to Pursue the American Dream 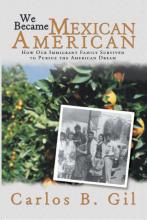 This is a story of Mexican family that arrived in America in the 1920s for the first time. And so, it is a tale of immigration, settlement and cultural adjustment, as well as generational progress. Carlos B. Gil, one of the American sons born to this family, places a magnifying glass on his ancestors who abandoned Mexico to arrive on the northern edge of Los Angeles, California. He narrates how his unprivileged relatives walked away from their homes in western Jalisco and northern Michoacán and traveled over several years to the U.S. border, crossing it at Nogales, Arizona, and then finally settling into the barrio of the city of San Fernando. Based on actual interviews, the author recounts how his parents met, married, and started a family on the eve of the Great Depression.

With the aid of their testimonials, the author’s brothers and sisters help him tell of their growing up. They call to memory their father’s trials and tribulations as he tried to succeed in a new land, laboring as a common citrus worker, and how their mother helped shore him up as thousands of workers lost their jobs on account of the economic crash of 1929. Their story takes a look at how the family survived the Depression and a tragic accident, how they engaged in micro businesses as a survival tactic, and how the Gil children gradually became American, or Mexican American, as they entered young adulthood beginning in the 1940s. It also describes what life was like in their barrio.

The author also comments briefly on the advancement of the second and third Gil generations and, in the Afterword, likewise offers a wide-ranging assessment of his family’s experience including observations about the challenges facing other Latinos today.