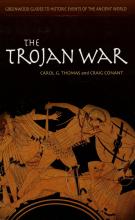 The Trojan War is an event that stands at the very foundation of the Western and the epic tradition, and this volume provides readers with an opportunity to experience it in as direct and as varied a manner as is possible.

For Ancient Greece as well as Ancient Rome, the Trojan War provided a history that seemed possessed of a power as magnetic as it was malleable; thus, in this single source these two great civilizations were able to find two distinct sets of heroes, two distinct sets of virtues, and two eternal poets. But different as Greece and Rome's experience of the Trojan War may have been, they united in an identical longing for a heroism that was attainable in the present only by reaching out for an impossible past. In Carol Thomas and Craig Conant's broad and varied account, the reader will have the opportunity to investigate the shadowy historical foundation that underlay the poetic environment of Achilles and Aeneas; as well as examine how the poetic experience altered the understanding of the Trojan War for the many cultures and civilizations that were touched by its expansive forces.

Designed as an accessible introduction to this critical event in the Western tradition, The Trojan War offers readers and researchers an engaging mixture of descriptive chapters, biographical sketches, and annotated primary documents. An overview of Troy and the world of the late Bronze Age is presented in the first chapter, followed by sections on: finding Troy and the Trojan War, Homer and the epic tradition, the force of legend, and Troy in the 21st century. An annotated bibliography and index are also included in this work.