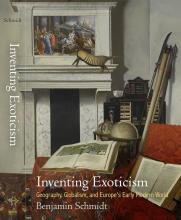 As early modern Europe launched its multiple projects of global empire, it simultaneously embarked on an ambitious program of describing and picturing the world. The shapes and meanings of the extraordinary global images that emerged from this process form the subject of this highly original and richly textured study of cultural geography. Inventing Exoticism draws on a vast range of sources from history, literature, science, and art to describe the energetic and sustained international engagements that gave birth to our modern conceptions of exoticism and globalism.

Illustrated with more than two hundred images of engravings, paintings, ceramics, and more, Inventing Exoticism shows, in vivid example and persuasive detail, how Europeans came to see and understand the world at an especially critical juncture of imperial imagination. At the turn to the eighteenth century, European markets were flooded by books and artifacts that described or otherwise evoked non-European realms: histories and ethnographies of overseas kingdoms, travel narratives and decorative maps, lavishly produced tomes illustrating foreign flora and fauna, and numerous decorative objects in the styles of distant cultures. Inventing Exoticism meticulously analyzes these, while further identifying the particular role of the Dutch—"Carryers of the World," as Defoe famously called them—in the business of exotica. The form of early modern exoticism that sold so well, as this book shows, originated not with expansion-minded imperialists of London and Paris, but in the canny ateliers of Holland. By scrutinizing these materials from the perspectives of both producers and consumers—and paying close attention to processes of cultural mediation—Inventing Exoticism interrogates traditional postcolonial theories of knowledge and power. It proposes a wholly revisionist understanding of geography in a pivotal age of expansion and offers a crucial historical perspective on our own global culture as it engages in a media-saturated world.