The Communist Experience in the Twentieth Century: A Global History through Sources 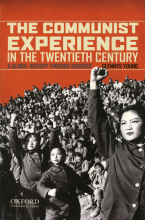 Using a source-based approach, The Communist Experience in the Twentieth Century is the first text designed to help students, general readers, and scholars understand how people constructed Communist ways of life around the world. Taking a global approach, it extends beyond Russia and Eastern Europe to examine the lives of people in China, Korea, Vietnam, Cambodia, Kyrgyzstan, Algeria, Peru, Cuba, and elsewhere. The book provides an inside look at the Communist experience, where people were--sometimes simultaneously so--enthusiasts, reshapers, resisters, and victims of an ideological project that was (and, for some, still is) both humanity's darkest nightmare and brightest hope.

Since the collapse of Communist regimes beginning in 1989, vital questions - about how people subjectively experienced Communism, helped to shape it, and constructed an idea of "self" in such restrictive environments - have not lost their political significance. In fact, just the opposite holds true. The opening of many formerly closed Communist archives has given scholars the opportunity to research the political significance that the construction of the self had across Communist regimes, polities, and movements. Incorporating the latest scholarship, The Communist Experience in the Twentieth Century includes previously unavailable documents, such as diaries and letters, which are now accessible as a result of the archival revolution. A photo essay, "Everyday Life and Everyday Things under Socialism, 1945-1989," uses visual evidence to explore everyday life across the Communist civilizations. A locator map at the beginning of each chapter identifies the places associated with each of the sources, and a chronology provides a comparative timeline for Communist and world history.