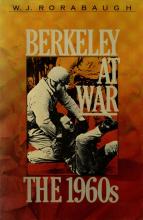 Berkeley, California stood at the center of the political, social, and cultural upheaval that made the 1960s a unique period in American history. In Berkeley at War, W.J. Rorabaugh, who attended the graduate school of the University of California at Berkeley in the 1970s, presents a lively, informative account of the events that changed forever what had once been a quiet, conservative white suburb.

Rorabaugh's meticulously researched, authoritative narrative covers the entire period, from the rise of the Free Speech Movement to the growth and increasing militance of a black community struggling to end segregation; from the emergence of radicalism and the anti-war movement to the blossoming "hippie" culture; and from the explosive conflict over People's Park to the beginnings of modern-day feminism and environmentalism. An invaluable account of its time and place, Berkeley at War anchors the sixties in American history, both before and since that colorful decade.

The book covers topics such as student restlessness (Free Speech Movement), white radicalism (Vietnam Day Committee, Students for a Democratic Society, etc.), black radicalism (Black Panthers), and the counterculture, as well as the connections across the boundaries of these various movements, in an atypical college town that proved to be one important crucible for the Sixties.