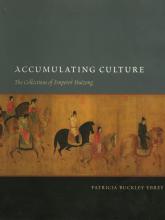 By the end of the sixth century CE, both the royal courts and the educated elite in China were collecting works of art, particularly scrolls of calligraphy and paintings done by known artists. By the time of Emperor Huizong (1082-1135) of the Song dynasty (960-1279), both scholars and the imperial court were cataloguing their collections and also collecting ancient bronzes and rubbings of ancient inscriptions. The catalogues of Huizong's painting, calligraphy, and antiquities collections list over 9,000 items, and the tiny fraction of the listed items that survive today are all among the masterpieces of early Chinese art.

Patricia Ebrey's study of Huizong's collections places them in both political and art historical context. The acts of adding to and cataloguing the imperial collections were political ones, among the strategies that the Song court used to demonstrate its patronage of the culture of the brush, and they need to be seen in the context of contemporary political divisions and controversies. At the same time, court intervention in the art market was both influenced by, and had an impact on, the production, circulation, and imagination of art outside the court.

Accumulating Culture provides a rich context for interpreting the three book-length catalogues of Huizong's collection and specific objects that have survived. It contributes to a rethinking of the cultural side of Chinese imperial rule and of the court as a patron of scholars and the arts, neither glorifying Huizong as a man of the arts nor castigating him as a megalomaniac, but rather taking a hardheaded look at the political and cultural ramifications of collecting and the reasons for choices made by Huizong and his curators. The reader is offered glimpses of the magnificence of the collections he formed and the disparate fates of the objects after they were seized as booty by the Jurchen invaders in 1127.

The heart of the book examines in detail the primary fields of collecting - antiquities, calligraphy, and painting. Chapters devoted to each of these use Huizong's catalogues to reconstruct what was in his collection and to probe choices made by the cataloguers. The acts of inclusion, exclusion, and sequencing that they performed allowed them to influence how people thought of the collection, and to attempt to promote or demote particular artists and styles.

This book will be of interest to scholars and students of Chinese art history, social history, and culture, as well as art collectors.