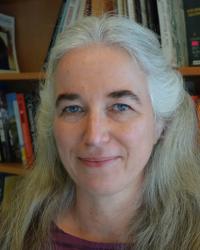 This page has been preserved in memory of Linda Nash, who passed away in October of 2021. She is dearly missed.

I am a historian of the twentieth-century US whose focus is on environmental and cultural history. My research interests revolve around how and why different people understand environments, material objects, and environmental change in the ways that they do, and the material and social implications of those understandings. Although my interest in history developed while I was an undergraduate, for many years I pursued my concern with environmental issues through the study of engineering, science, and policy. In addition to an AB and Ph.D. in History, I also hold a BS in Civil Engineering and an MS in Energy and Resources.

As a twentieth-century historian, I am especially interested in the evolution of certain kinds of professional knowledges and identities, how those knowledges and identities gain status and authority at particular moments, how they travel, and what happens when individuals encounter different environments and alternative ways of understanding the world. My book, Inescapable Ecologies: A History of Environment, Disease, and Knowledge, draws on environmental history and the history of the body to explore the ways in which doctors, public health officials, engineers, and lay persons have understood the intertwined issues of environment, health, race, and disease in one particular place from the late nineteenth to the late twentieth century. This book was awarded the American Historical Association's John H. Dunning Prize, the American Historical Association-Pacific Coast Branch Book Prize, and the Western Association of Women Historian's Serra-Keller Prize. My current book project continues my interest in the production of knowledge, while placing that interest in a transnational frame and looking at a different set of concerns and actors. Tentatively titled Engineering Modern Lands, this book tells a cultural, environmental, and postcolonial history of postwar "development" by following American water engineers in the decades immediately after World War II as they moved between Washington's Columbia Basin and Afghanistan's Helmand Valley. Focusing on how local environments and materials have shaped technoscientific practices across the twentieth century, I am especially interested in how American approaches to infrastructure grew out of the nation's settler colonial history in the American West.

My teaching and research reflect my continuing interest in issues of environment and culture, disease and public health, science and technology studies, and the history of the US West, as well as more recent interests in consumption and consumerism, material culture studies, and transnational environmental history.

History of the trans-Mississippi West, emphasizing social and cultural history in the nineteenth and twentieth centuries. In addition, students are expected to address the methodological issues posed by regional (versus national and transnational) approaches to history. Among the possible emphases are nineteenth-century colonialism, race and racial ideology, women and gender, environment and land use, representations of the West, politics and the state.

A broad chronological field that covers major developments in social and cultural history and politics since 1880.