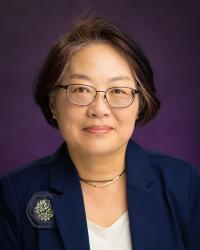 I am a historian of modern Korea specializing on the labor, gender, and intellectual history of the post-WWII period in South Korea. I grew up in Seoul, Korea, and received B.A. and M.A. degrees from the Korean History Department at Seoul National University before coming to the U.S. My Ph.D. training in history was at the UW with the late Professor James B. Palais as my main adviser. After earning my Ph.D. degree in 2003, I worked in the History Department at the University of Utah for four years, teaching Asian and Korean history courses. I came back to the UW in 2007 to become the first holder of a new professorship that was established in honor of Professor Palais. I have a joint appointment with the History Department and the Jackson School of International Studies, and serve as one of the core faculty members in the Korean Studies Program and the Center for Korea Studies, both housed in the Jackson School.

My dissertation research was on South Korean nation-building history during the Park Chung Hee era (1961-1979) seen through a case study of state-business-labor relations at a premier shipyard, Korea Shipbuilding and Engineering Corporation (KSEC), in Pusan, South Korea. That research was published in 2009 as Building Ships, Building a Nation: Korea's Democratic Unionism under Park Chung Hee by the University of Washington Press, and won the James B. Palais book prize at the annual conference of the Association for Asian Studies (AAS) in Honolulu in April 2011. The prize, administered by the Northeast Asia Council (NEAC) of the AAS, is for the best English-language book in Korean Studies from all disciplines. The book has been translated into Korean and published in 2014 in Korea by Humanitas.

As the only Korea historian at the UW, I annually teach lower- and upper-division survey courses on Korean history, both pre-modern and modern, for undergraduate and graduate students, and occasionally offer seminar courses on special topics, including labor, gender, and developmental politics in late twentieth-century South Korea.