Professor Hwasook Nam publishes new book Women in the Sky: Gender and Labor in the Making of Modern Korea 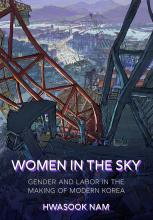 Emeritus Associate Professor Hwasook Nam published her new book Women in the Sky: Gender and Labor in the Making of Modern Korea by Cornell University Press in 2021.

Women in the Sky examines Korean women factory workers' century-long activism, from the 1920s to the present, with a focus on gender politics both in the labor movement and in the larger society. It highlights several key moments in colonial and postcolonial Korean history when factory women commanded the attention of the wider public, including the early-1930s rubber shoe workers' general strike in Pyongyang, the early-1950s textile workers' struggle in South Korea, the 1970s democratic union movement led by female factory workers, and women workers' activism against neoliberal restructuring in recent decades.

Hwasook Nam asks why women workers in South Korea have been relegated to the periphery in activist and mainstream narratives despite a century of persistent militant struggle and indisputable contributions to the labor movement and successful democracy movement. Women in the Sky opens and closes with stories of high-altitude sit-ins—a phenomenon unique to South Korea—beginning with the rubber shoe worker Kang Churyong's sit-in in 1931 and ending with numerous others in today's South Korean labor movement, including that of Kim Jin-Sook.

In Women in the Sky, Nam seeks to understand and rectify the vast gap between the crucial roles women industrial workers played in the process of Korea's modernization and their relative invisibility as key players in social and historical narratives. By using gender and class as analytical categories, Nam presents a comprehensive study and rethinking of the twentieth-century nation-building history of Korea through the lens of female industrial worker activism.