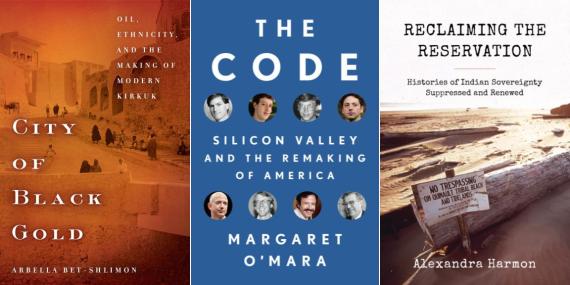 Autumn 2019 has produced a bumper crop of book launch celebrations in the History Department. Associate Professor Arbella Bet-Shlimon, Professor Margaret O’Mara, and Professor Emeritus Alexandra Harmon each gave talks on their books for department members and the public in the last month.

Professor Bet-Shlimon debuted her book City of Black Gold: Oil, Ethnicity, and the Making of Modern Kirkuk (Stanford University Press, 2019) to the department in October. City of Black Gold re-examines the history of the petroleum industry in Iraq through the prism of the city of Kirkuk’s profound ethnic and linguistic diversity. The book asks what it means for disputes over control of the city, cast in ethnic terms, to be “about oil.” Bet-Shlimon posits that the region’s contentious politics are products of twentieth century social and economic history, not an inevitable characteristic as international diplomats, mediators, and journalists commonly portray it.

Professor O’Mara published her new book The Code: Silicon Valley and the Remaking of America (Penguin Press, 2019) in July to abundant buzz. In recent months she has shared related op-eds with The New York Times and The Washington Post as well as spoken to audiences on MSNBC, Geekwire, and a variety of other public forums. O’Mara undertook the project to offer an explanation for why Silicon Valley’s technology companies had become so successful. What was the key to Microsoft, Apple, and Facebook’s ubiquity? Linking the history of the California valley to national political history, O’Mara concluded that the answers lay in the huge outlays of federal investment for defense spending and the space race in the latter half of the twentieth century. She would like her next book, she joked at The Code book launch party last week, to be about something other than white men, a reference to the six men whose portraits grace the book’s cover.

Harmon, Professor Emeritus in American Indian Studies and History, gave the most recent Emil and Kathleen Sick Lecture on Western History and Biography on her book Reclaiming the Reservation: Histories of Indian Sovereignty Suppressed and Renewed (University of Washington Press, 2019) the first week of November. Harmon discussed the question that drove her to write a book about jurisdiction on Indian reservations in the Pacific Northwest: Why did Indian leaders, after decades of very limited tribal governance, conclude in the 1970s that their governments could wield broad power on reservations? The answer, she suggested, lay in the convergence of national and local histories. The US federal government and Native nations continue to negotiate their relations, she shared with the audience, in what has been an ongoing process of the last two centuries.