Race and Racial Justice in the Context of the 2016 U.S. Presidential Election 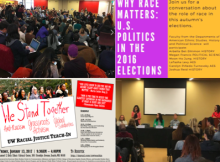 Over the past academic year, faculty, staff, graduate students, and undergraduates in the Department of History have organized and participated in a series of events focused on race and racial justice in the context of the 2016 U.S. presidential election and its aftermath.

In October 2016, the Department’s Diversity Committee sponsored a panel discussion at the Samuel E. Kelly Ethnic Cultural Center. The theme of the meeting was “Why Race Matters: U.S. Politics in the 2016 Elections.” Faculty from American Ethnic Studies (Professor Carolyn Pinedo-Turnovsky), History (Professors Moon-Ho Jung, Arbella Bet-Shlimon, and Josh Reid) and Political Science (Professor Megan Francis) participated in the event.  History Professor Ileana Rodriguez-Silva organized the gathering and served as moderator. The panel was well-attended and standing room only.

The event's timing was significant, occurring several weeks before Election Day. It offered students a space to reflect and ask questions. It also provided historical depth and context to debates taking place in the run-up to voting, especially as they related to race and racialization. For example, as Professor Rodriguez-Silva explained, during the election process, there was hypervisibility (although in very selected ways) of some racialized communities, while others were erased, rendered as inconsequential, but all reproducing the social order of exclusion needed to sustain the current form of the nation-empire. By discussing and analyzing these issues prior to the election, students could more critically assess campaign and media rhetorics.

The History Department was also a co-sponsor of an important event, “We Stand Together” in January 2017. This teach-in focused on anti-racism, racial justice, grassroots activism, and global solidarities in the wake of the 2016 election results. It featured sessions on “Now What? Framing and Confronting the Post-Election Moment” and “Working toward Safety and Solidarity across Our Communities,” as well as small group discussion sessions. Registration filled ahead of time given the importance of these subjects to the UW community and beyond. Professor Stephanie Smallwood led a working group comprised of faculty, staff, and students in the coordination of this event.