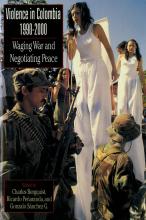 Violence In Colombia provides students with a deeper understanding of the crisis facing Colombia today. The book focuses on the 1990s, a decade that witnessed a strengthening of the oldest and largest guerrilla insurgency in the Americas and the emergence of a powerful paramilitary right. The decade also saw a dramatic rise in homicide, kidnapping, and human rights violations that made Colombia by far the most violent nation in the hemisphere.

But the 1990s was also about negotiating peace. The decade began with negotiations between the government and some of the guerrilla groups that led to their demobilization and to the important reforms codified in the Constitution of 1991. It ended with another serious attempt at negotiating peace, a historic agreement between the government and the largest and most powerful of the guerrilla groups to put a range of social and economic reforms on the negotiating table.

For many, the crisis in Colombia is understood in terms of the drug trade. To be sure, the drug trade is implicated in every aspect of the crisis. And despite (or because of?) escalating efforts by the Colombian and U.S. governments to curb the trade, Colombia's role as the leading supplier of cocaine, and increasingly of heroin, to the U.S. market continues to expand. But the drug trade, by itself, cannot explain the crisis. If it could, why have other Latin American drug-producing and trafficking nations not experienced a fate like Colombia's?

To answer this question, the book presents some of the best recent work by Colombian scholars on the crisis facing the nation. Violence in Colombia also includes a large section devoted to primary documents, which enables students to get a feel for the views of the protagonists in the conflict and judge for themselves the meaning of what they say. Examples include the negotiating positions of the government, the guerrillas, and the paramilitary right; and testimony by kidnap victims and human rights lawyers.