Southern Diaspora: How the Great Migrations of Black and White Southerners Transformed America 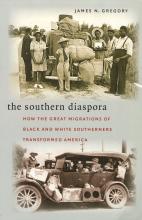 Between 1900 and the 1970s, twenty million southerners migrated north and west. Weaving together for the first time the histories of these black and white migrants, James Gregory traces their paths and experiences in a comprehensive new study that demonstrates how this regional diaspora reshaped America by "southernizing" communities and transforming important cultural and political institutions.

Challenging the image of the migrants as helpless and poor, Gregory shows how both black and white southerners used their new surroundings to become agents of change. Combining personal stories with cultural, political, and demographic analysis, he argues that the migrants helped create both the modern civil rights movement and modern conservatism. They spurred changes in American religion, notably modern evangelical Protestantism, and in popular culture, including the development of blues, jazz, and country music.

In a sweeping account that pioneers new understandings of the impact of mass migrations, Gregory recasts the history of twentieth-century America. He demonstrates that the southern diaspora was crucial to transformations in the relationship between American regions, in the politics of race and class, and in the roles of religion, the media, and culture.