New Studies in the History of American Slavery 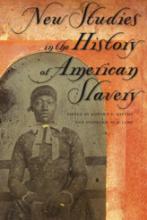 These essays, by some of the most prominent young historians writing about slavery, fill gaps in our understanding of such subjects as enslaved women, the Atlantic and internal slave trades, the relationships between Indians and enslaved people, and enslavement in Latin America. Inventive and stimulating, the essays model the blending of methods and styles that characterizes the new cultural history of slavery’s social, political, and economic systems.

Several common themes emerge from the volume, among them the correlation between race and identity; the meanings contained in family and community relationships, gender, and life’s commonplaces; and the literary and legal representations that legitimated and codified enslavement and difference. Such themes signal methodological and pedagogical shifts in the field away from master/slave or white/black race relations models toward perspectives that give us deeper access to the mental universe of slavery.

Topics of the essays range widely, including European ideas about the reproductive capacities of African women and the process of making race in the Atlantic world, the contradictions of the assimilation of enslaved African American runaways into Creek communities, the consequences and meanings of death to Jamaican slaves and slave owners, and the tensions between midwifery as a black cultural and spiritual institution and slave midwives as health workers in a plantation economy.

Opening our eyes to the personal, the contentious, and even the intimate, these essays call for a history in which both enslaved and enslavers acted in a vast human drama of bondage and freedom, salvation and damnation, wealth and exploitation.