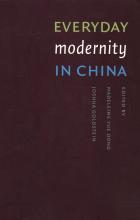 Is modernity in non-Western societies always an “alternative” modernity, a derivative copy of an “original modernity” that began in the West? No, answer the contributors to this book, who then offer an absorbing set of case studies from modern China to make their point. By focusing on people’s ordinary routines of working, eating, going to school, and traveling, the authors examine the notion of modernity as it has been staged in the minute details of Chinese life.

Essays explore people’s basic search for food, water, and lighting during the late-Qing - early republican era; contradictory attitudes toward women and the violence of foot-binding; the role of Chinese scientists in promoting a shift to modern, nationalistic discourses; the growing popularity of savings banks among urban Chinese in the early twentieth century; the transnational and national identities of returned overseas Chinese in Xiamen, Fujian Province; and middle-class “Shanghai travelers” who imagined themselves as cosmopolitan consumers.

Looking at the post-Mao reform era of the late twentieth century, contributors explore the theme of “revaluation” – that is, the way China’s move into global capitalism is commoditizing goods and services that previously were not for sale, from domestic labor to recycling and water resources, in an increasingly consumer-oriented society.