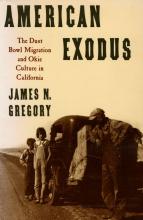 Fifty years ago, John Steinbeck's now classic novel, The Grapes of Wrath, captured the epic story of an Oklahoma farm family driven west to California by dust storms, drought, and economic hardship. It was a story that generations of Americans have also come to know through Dorothea Lange's unforgettable photos of migrant families struggling to make a living in Depression-torn California. Now in James N. Gregory's pathbreaking American Exodus, there is at last an historical study that moves beyond the fiction and the photographs to uncover the full meaning of these events.

American Exodus takes us back to the Dust Bowl migration of the 1930s and the war boom influx of the 1940s to explore the experiences of the more than one million Oklahomans, Arkansans, Texans, and Missourians who sought opportunities in California. Gregory reaches into the migrants' lives to reveal not only their economic trials but also their impact on California's culture and society. He traces the development of an "Okie subculture" that over the years has grown into an essential element in California's cultural landscape.

The consequences, however, reach far beyond California. The Dust Bowl migration was part of a larger heartland diaspora that has sent millions of Southerners and rural Midwesterners to the nation's northern and western industrial perimeter.American Exodus is the first book to examine the cultural implications of that massive 20th-century population shift. In this rich account of the experiences and impact of these migrant heartlanders, Gregory fills an important gap in recent American social history.