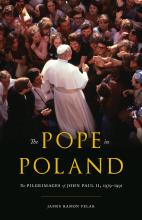 Professor James Felak published a new book The Pope in Poland: The Pilgrimages of John Paul II, 1979-1991 by the University of Pittsburgh Press in October 2020.

John Paul II was the first non-Italian pope in over 500 years, and the first Slavic pontiff in history. Shortly after his election to the papacy in 1978, he launched a series of visits to his native Poland, then in the midst of dramatic social changes that heralded the end of Communism. In this groundbreaking book, James Ramon Felak carefully examines the Pope’s first four visits to his homeland in June of 1979, 1983, 1987, and 1991 in the late Communist and immediate post-Communist period. Careful analysis of speeches, press coverage, and documents from the Communist Party, government, and police show how the Pope and the Communist authorities engaged one another. Felak gives equal attention to John Paul’s political and religious messages, highlighting how he astutely maneuvered between the rising hopes of the Polish people and the dangerous fears of a dying regime. The Pope in Poland recreates and explicates these dramatic visits that played a major role in the collapse of Communism in Poland as well as laid out a papal vision for Poland’s post-Communist future.