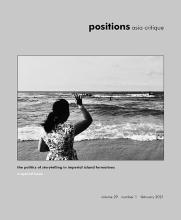 Professor Emeritus Laurie Sears and Professor Ileana Rodríguez-Silva edited a special issue, Politics of Storytelling in Imperial Island Formations, for Positions: Asia Critique. Other UW colleagues that are part of this endeavor are Professor of History Vicente Rafael, Professor and Chair of American Ethnic Studies Rick Bonus, and Affiliate Assistant Professor of Comparative Literature Francisco Benitez. This was an international and interdisciplinary collaboration.

As stated on Duke University Press, "contributors to this special issue reconceptualize island worlds and their networks as spaces that come to life through the multiple and contested meanings constantly attached to them. Investigating the types and politics of storytelling in the island South and Southeast Asia, as well as the parallel and intersecting formations in the Caribbean and diasporic Asian America, the authors refashion the notion of comparison to move away from the project of 'knowing' and to illuminate forms of comparison that emerge from local environments and local knowledges."