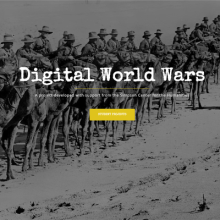 The course teaches students to use digitized historical data and digital humanities (DH) tools to analyze and represent the World Wars to an audience beyond the class. In addition to attending lectures and live sessions, students participate in three online workshops to learn digital history skills, and design a final digital project—in lieu of an exam or essay—that either employs data analysis and visualization, or presents a public-facing podcast. With an enrollment of 120, the class shows how DH-inspired pedagogy could refashion the teaching of history.

Driven by a shared passion in DH, Taylor, a specialist on modern Britain and WWI, and Laurie, a historian of Nazi Germany, decided to co-teach a digital history class on the two World Wars back in 2019. This bold idea bore fruit in Summer 2020, when the duo received a Digital Humanities Summer Fellowship from the Simpson Center for the Humanities.

Reflecting on their successful collaboration, the two co-instructors agreed that it would be impossible to do such a digital project alone. “Laurie is an example of an awesome faculty mentor,” said Taylor, “by proposing that we develop and teach this class together, she created a big new opportunity for me.” While traditional humanities highlight independent work, a large digital humanities project makes teamwork essential. “That’s one thing I love about DH—it recognizes that collaboration is key to making big projects happen,” Taylor added.

“Co-teaching has been really fun and I think students like it,” Laurie explained, “Having two voices and perspectives livens things up.” Laurie emphasized that Taylor’s “dual expertise in digital histories and in the First World War” made her an ideal person to co-teach HSTCMP 202: “I’m a total newcomer to digital humanities stuff, so Taylor really took the lead on that part of the class.”

Taylor, who received a B.A. from George Washington University, explained that her interest in DH emerged after moving to Seattle. “I was meeting so many people—friends but also students—working in data science here in Seattle,” she said, “and I started to wonder how historians could use these tools in our research and in our teaching.” Thanks to resources at the Simpson Center, the institution spearheading the DH trend at the UW, Taylor ventured into the world of digital humanities. Intensive training at two international DH summer institutes at the University of Victoria and Oxford University further helped her to acquire the skills and visions for designing a digital history class.

Though many students were originally drawn to class based on its historical topic, Laurie and Taylor were both impressed by the students’ growing enthusiasm for the DH focus of the class. “So far they’re totally learning those skills,” said Laurie. “In class they’re very excited and participate a lot,” she added, “and we have pretty high attendance at our live sessions.” “I’ve been so excited to hear from students that they’re liking the digital history assignments and readings,” Taylor explained, “Despite taking the class online and dealing with all the stress of this year, they are so engaged with the material and with the DH aspects of the class.”

Alexie Walker, a fourth-year history major who has previously taken courses with Laurie and Taylor, described HSTCMP 202 as an eye-opening experience to digital history. “We are at the forefront of this new medium and this course is using that to its advantage,” she commented. She is especially keen on her final digital project—“I am hoping to study the correlations between the initial diagnoses of Shell Shock and the modern diagnosis of PTSD.” Looking into the future, Alexie said “I think the more people learn about Digital history and Humanities, and the more it evolves, the better we can utilize it for education and research.”

Institutional support was critical for the success of this digital history class. The Simpson Center fellowship allowed the co-instructors to spend the summer working on course development, and in particular to recruit Doctoral Candidate Adrian Kane-Galbraith, a specialist of modern UK, to create a website for the class.

The newly launched Data Science Minor at the UW provided a grant to the course, and incorporate it into their interdisciplinary curriculum. Verletta Kern, Digital Scholarship Librarian at UW Libraries, assisted to promote this online class in the Open Scholarship Commons.

At the Department of History, Ileana Rodriguez-Silva (Director of Undergraduate Studies), Tracy Morrissey (Director of Academic Services), and Glennys Young (Department Chair) all championed this digital history course from the beginning. “They had to give it the green light and devote department resources to it and they did,” said Laurie, “I'm grateful to them too.”