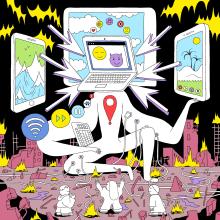 In Winter 2021, the Department of History will be launching two brand new courses: "At the Top of the World: Arctic Histories," and "History of the Digital Age."

For students and history fans who are inquisitive about the northernmost lands of our planet, Associate Professor Elena Campbell will be teaching ARCTIC/HSTCMP 200 "At the Top of the World: Arctic Histories." The course offers a thrilling intellectual exploration of the history of people, cultures, and nature in the Arctic regions. Another exciting feature: as you can tell from the course number, this newly-designed class will be jointly offered in History and in the UW Arctic Studies program. The development of this course was made possible with generous support through the Robert A. Nathane Sr. Endowed Fund, a fund named after the former UW Board of Regents Treasurer that provides support to Department of History faculty.

And, for those who are eager to understand the historical foundations of our current high-tech world, HSTAA 317 "History of the Digital Age," newly prepared by Professor Margaret O'Mara, will take you on an intellectual tour of this new reality. In addition, no matter what your own current level of tech-savvy may be, the course also offers you the chance to exercise or grow those skills, through its digital assignments.

New courses at the UW are usually inspired by faculty research. "Arctic Histories" and "History of Digital Age" are no exception to this trend, as they spring from Professor Campbell's and Professor O'Mara's most recent scholarly endeavors.

A historian of imperial Russia, Professor Elena Campbell is currently working on a new book project, The Northern Turn: Nationalism, Development, and Environment in Late Tsarist Russia. The book explores Russia’s turn to the North and the aspiration to establish itself as a Northern imperial nation during the late tsarist era (1860s-1917). "I intend to write a book that will be of interest to historians of Russia and the Arctic region, as well as scholars of empire, nationalism, environment, and modernity more broadly," Campbell explains.

The release of "Arctic Histories" also showcases Professor Campbell's collaboration with the UW Arctic Studies Program. With her UW colleague Nadine Fabbi she is co-Council Representative for the UArctic."

Professor Margaret O'Mara is a historian of modern America, and a contributing opinion writer at the New York Times. Her research focuses on the high-tech industry, American politics, and the connections between the two. She is author of Cities of Knowledge: Cold War Science and the Search for the Next Silicon Valley (2005), a book that explains how Silicon Valley came to be and what the Cold War had to do with it. Her most recent book, titled The Code: Silicon Valley and the Remaking of America (Penguin Press, 2019), is a history of the tech industry from the 1940s to the present.

Check out more details about these cool new courses below!

ARCTIC/HSTCMP 220: At the Top of the World: Artic Histories

This course will explore the history of humans’ understanding of and relationship to the Arctic and sub-Arctic regions, by tracing the social, economic, political, and environmental transformations of the Earth’s northernmost areas during the period from the earliest settlements to the end of the 20th century (the creation of the Arctic Council in 1996), as well as the shifts in ideas that accompanied these changes.

The topics covered in this course include the history of indigenous settlements and adaptation to the northern environment; European colonization, state-building and border-making; the international race to the North Pole, the Soviet conquest of the Arctic and the GULAG in the Far North; indigenous rights, decolonization, environmental concerns and attempts for international cooperation.

HSTAA 317: History of the Digital Age

Understanding the present and future of our high-tech world requires understanding its past. This course examines the evolution of the American computer hardware and software industries from the Manhattan Project and mainframes of the 1940s to the social media and software giants of today. We’ll explore why American technology companies (in Silicon Valley, Seattle, and elsewhere) became such a successful and consequential force in business and society, unearth the human stories and political histories behind the technology, and historicize and contextualize today’s debates about digital technologies and platforms.

This is a class for students who build, study, or use digital technology—in short, everyone. No prerequisites required.