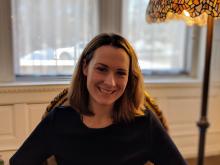 “Jessica!” a friend’s message began. “Huge shout-out to you on 99% Invisible!” Jessica Bachman responded with thanks, and then added, “I forgot to tell you about it, but actually I was the source for the story.”

Bachman, a doctoral candidate in history, was busy with archival research in Russia when she received a message from a producer at the popular podcast 99% Invisible, which examines aspects of our society that most of us know little about, or take for granted. The producer had found the website Bachman built in 2016 as part of an exhibit she curated for UW Libraries, about the Soviet books that children read in India in the 1960s and 1970s as part of an international Soviet printing program.

The website, Bachman explains, “contains some original oral history interviews with Indian  actors and producers who were involved in the cinematic exchange between India and the USSR.” Likely the producer found her website from keyword searches. “She then emailed me and asked if we could talk for an hour.” Bachman said yes.

When asked about her role behind the scenes of the podcast episode, Bachman explained, “Some of the interviews that [the journalist] conducts on the podcasts were originally my contacts (people I interviewed for my exhibit). She was having a particularly hard time finding someone from the former USSR who grew up with Bollywood cinema and who could be interviewed in English. So I put her in touch with someone I interviewed who is from Uzbekistan but who resides on Mercer Island now. I also gave her the names of scholars who have studied the history of this exchange.”

Bachman currently resides in India, where she continues to research the role that book exchange and book exports from the USSR played in the cultural and social lives of individuals in South Asia at the crossroads of the Cold War and decolonization. In the future, she says that she would love to publish a photo essay on this aspect of cultural Cold War relations for a popular audience.

After 99% Invisible released the episode, Bachman shares, friends around the world contacted her, suggesting the podcast might be helpful to her dissertation. “They did not know, of course, that I had been consulted for the segment,” laughs Bachman, “but these comments made me very happy to know that there is public interest in this topic!”

Listen to the podcast referencing Jessica’s research in episode 353, “From Bombay with Love,” from 99% Invisible.