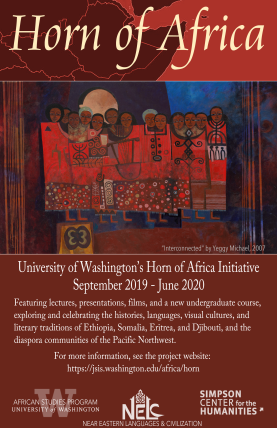 In 2018, when history doctoral student Jeffrey Haines decided to enroll in a class in the Ge'ez language—an ancient form of Ethiopic similar to Syriac—taught by one of his advisors, assistant professor of Near Eastern Languages and Civilization (NELC) Hamza Zafer, he expected that he and a friend would be the only people interested. Haines explained that he had particular scholarly reasons for wanting to learn the language: “East Africa was an important part of the late ancient and medieval world, and I thought that trying Ge'ez might open some intellectual doors.” Based on his past experience as a student of ancient and medieval languages, Haines put off registering for the course. Space would still be available when he got around to it. After all, Ge'ez is rarely taught outside the Horn of Africa and there were only two students planning to enroll.

Haines was surprised, then, and a little annoyed to learn that the class had filled up. “But when I showed up the first day to tell Hamza about the mistake, the class was packed,” he said. “Students were standing in the back and spilling out into the hallway. We ended up moving to another, bigger classroom, which also quickly filled up.” The situation was so unusual that it garnered attention from the UW College of Arts and Sciences newsletter, which wrote: “Hamza Zafer . . . expected a handful of students to sign up when he offered this obscure classical language. Instead the class filled to capacity, with 30 students enrolled within days and more on the waiting list.” As the college noted, there were, in fact, only four graduate students at the university with a scholarly interest in the language. What they had not anticipated was the significant number of students on campus who are children of immigrants from Horn of Africa countries—Somalia, Ethiopia, Eritrea, and Djibouti—in whose communities Ge’ez continues to be spoken as a liturgical language.

“It was clear that there was a ton of interest in East African language, history, and culture, as well as a lot of material to work with,” shared Haines, “but almost no classes that could meet that interest.” As it stands, the University of Washington is one of only three universities outside the Horn of Africa itself to provide formal training in Ge'ez, making Professor Zafer’s language course a rare opportunity for students with Horn of Africa heritage.

When Haines later met with his advisor, history professor Joel Walker, to discuss grant ideas, “I mentioned that I wanted to prioritize finding a way to build more East African classes or public humanities programs.” Alongside Zafer, fellow history faculty Ray Jonas and Lynn Thomas, and a range of other collaborators, Haines and Walker pursued grants and funding from the Simpson Center for the Humanities and other units across campus, including the Departments of History and NELC and the African Studies Program, to make that aspiration a reality. Sixteen different academic units contributed support. They made connections across university campuses and among Ethiopian, Eritrean, and Somali communities in Seattle that made it possible to design and assemble a two-year project, the Horn of Africa Initiative.

The Horn of Africa Initiative takes a two-part approach to building a campus community around the rich histories and cultures of Somalia, Ethiopia, Eritrea, and Djibouti that combines new courses with public events. History faculty and students have played key roles in the project's concept, design, and funding. This fall, Professors Walker and Zafar, initiative directors, co-taught an introductory course on the region, and Zafar will teach Ge’ez once again this winter. In addition, the initiative has featured six public lectures since September and will host more in winter. Walker shared that he intends to apply for funding to continue the lecture series into next year and that he and other facilitators are in conversation with community and student groups about possible film and music events, including partnerships with the Seattle Art Museum and the Northwest African American Museum.

Asked about the project’s intended audiences, Walker stated that the Horn of Africa Initiative was intended for “everyone in the University of Washington community—staff, students, and faculty.” It was important to him that they specifically invite university staff, a substantial portion of whom have horn heritage. He stated that the initiative’s goal “is to show the university community that we can be a major teaching and research center for the horn. Beyond that, our goal is to build bridges between the university and the larger horn community.” To those ends, the project aims to get one or more Horn of Africa languages into regular course offerings and to expand faculty expertise on the region.

“Having a course on the books that gives space—and university credit—to students to connect with the history of East Africa already feels like a win,” wrote Haines. “The horn communities living in Seattle are only going to become bigger and more important as time goes by,” he concluded. “We hope that the HOA Initiative will be a springboard that will combine their many talents with those that the university can offer so that people who are interested in the horn—or don't know that they should be—will find a place to connect with it.”