Ancient Iran Day: Another Side of the Ancient World

In December, the Department of History and the Department of Near Eastern Languages and Civilization, hosted a major public history event: Ancient Iran Day: Another Side of the Ancient World. This unique occasion brought together Seattle’s Persian community and experts on the ancient world to offer a diverse audience the chance to explore the wonders and mysteries of one of our oldest civilizations. The resulting celebration of Iranian history and culture proved a huge success, attracting more than 500 attendees.

The day’s activities were spread across five conference rooms, with participants in each room examining a different aspect of the region’s history. In the lecture room, attendees were treated to talks from several experts on topics ranging from the development of Persian coins to the sacred nature of cows in classical    Iranian religion and mythology. 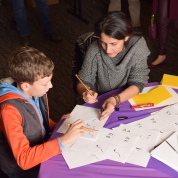 There was an exhibition room full of art, artifacts, and texts that offered an accessible and immersive window onto the past. And, true to its family-friendly mission, the event also had a children’s area, where delighted visitors were given classical Persian hairstyles, inscribed their names on Sumerian clay tablets, or tried their hand at drawing objects from the Iranian past.

One of the highlights of the day was the research work of Daniel Waugh, professor emeritus of history. A slideshow of his extensive collection of ancient Iranian architectural sites and artifacts was set up in the exhibition room, providing a broad audience with the rare opportunity to appreciate his exceptional scholarly contributions. 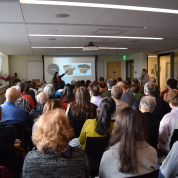 Professor Joel Walker—Lawrence J. Roseman Endowed Professor in the Department of History and one of the event’s main organizers—reflected on the important role events like this play in connecting the university with local communities:

“One of the signature achievements of Ancient Iran Day was the scale of collaboration between university and community that was sparked by the project. . . . Although the project was conceived and organized from the university, and involved specialized knowledge that only a university could offer, its success hinged on the contributions of community artists, intellectuals, and teachers who helped bring the vision alive.”

Also reflecting on the day was Maluhia Shaw, a native of Edmonds, Washington, who attended after hearing about the event from a friend:

“It was a great opportunity for me to learn about a culture and region which I admit I knew little about but was very used to seeing portrayed negatively in the media. This event opened my eyes and helped me to realize the limited and problematic nature of the popular narrative of ‘Iran.’ Through listening to the lectures and talking to members of the local Persian community I came to realize just how connected our histories are.”

This response was exactly what the organizers and many in the Persian community had hoped to achieve by showing “another side of the ancient world.”

Professor Walker, Stephanie Selover (Assistant Professor, Near Eastern Languages and Civilization) and Jeff Haines (UW History Ph.C.), are currently working on a website, and have plans to make a short documentary, about the event as part of a larger project on the teaching of Iranian history. One of the goals of this project is to continue to challenge the myths about the region that remain dominant in popular culture. The proposed documentary will be a co-production by the filmmakers Baabak Nassirian, a second-generation immigrant from Tehran, and Emma Hinchliffe, a PhD candidate in the Department of History.