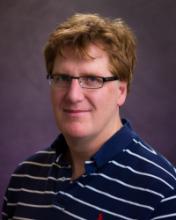 This student given award reflects the meaningful impact Professor Walker has had in the classroom in his nearly ten years of service to the Department of History.

A professor of ancient and early medieval Eurasia, many students first meet Professor Walker during his survey course on the Ancient World where he enthusiastically challenges them to think critically about the past and brings the era to life using a diverse range of sources. Many freshman, including Calvin Paulson, have credited him as the reason they decided to major in History, moved by his contagious passion for the past.

Calvin explains, “Though I entered somewhat unsure as to what I wanted to major in, by the end of my first quarter I was certain beyond doubt that History was the major for me. This is, in part, due to the enthusiasm and passion with which Dr. Walker presented the material in that class.”

One thing, among many, that makes Professor Walker stand out are his eclectic and innovative courses, especially the classes he has crafted for the honors program and graduate studies. Notable titles include, “Heaven and Earth: Animal-Human Relations from Paleolithic Cave Art to the Chicago Stockyards”  - where students are asked to explore and interrogate the relationship between animals and humanity over time - and “The Mongols: Empire and Resistance in Medieval Eurasia.”

Another thing the students who awarded this prize pointed out was Professor Walker's commitment to high standards and academic rigor. Under his guidance they were able to develop effective communication, reading, and writing skills that have served them well inside the classroom and out.

And it is not only in the classroom where you can see Professor Walker's impact. He is a caring and thoughtful presence in the history department whose door is always open to anyone who might have a question, whether it be about ancient history or the more general stresses of college life. He also knows more about pearls than probably anyone else on campus! These are the topic of his current monograph, “Jewel of the Palace and the Soul: Pearls in the Arts, Imagination, and Economy of Late Antiquity.” This research integrates literary, art historical, and archaeological evidence to examine the role of pearls as objects of adornment and spirituality in the Roman Empire, early Christianity, Byzantium, the Sasanian Empire, and early Islam.

This well-deserved awarded caps off Professor Walkers year as the inaugural holder of the Lawrence J. Roseman Endowed Professorship at the University of Washington.