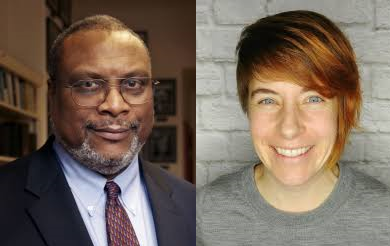 We’re only in April, but it has already been another award-winning year for our faculty. In March, Professor Emeritus Quintard Taylor was awarded a lifetime achievement award from the Washington State Historical Society. He received the society’s Robert Gray Medal for 2017 in recognition of his “far-reaching commitment to researching, preserving and promoting the history of African-Americans in the Pacific Northwest.”

Professor Taylor received this award after more than four decades of teaching and research. It adds to a long list of accolades that stand as a testament to his extensive work and career. He is the Scott and Dorothy Bullitt Professor of History at the University of Washington and has published extensively on African American history. His books include The Forging of a Black Community: Seattle’s Central District, from 1870 through the Civil Rights Era (UW Press, 1994) and In Search of the Racial Frontier: African Americans in the American West, 1528–1990 (Norton, 1999). He is also the founder of BlackPast.org, an online reference guide to African American history, where users have access to thousands of stories from the African American past.

To mark the award Professor Taylor sat down with UW News to talk about the contemporary importance of his work on race and ethnicity. In the interview, he encouraged people to take “the long view” when it comes to assessing racial justice and politics in the era of Trump. He continued, “This kind of angst we’re in now, the moment we’re in, didn’t come out of a vacuum or thin air. President Trump’s not even responsible for it. This is a long, long history that has been going on in this country, north, south, east, and west.” The full interview can be read online.

Big congratulations are also due to one of the Department of History’s more recent hires, Laurie Marhoefer. At the start of the year Marhoefer’s article “How Should We Protest Neo-Nazis? Lessons from German History” was chosen by editors and readers of the independent news website The Conversation US as their most memorable piece of 2017.

In this thought-provoking article Marhoefer brings her experience as a historian of Weimar and Nazi Germany to bear on current debates surrounding the rise of neo-Nazism in today’s fractured America; specifically, she addresses how to best confront and tackle the issue. She concludes that the history of the Third Reich teaches us that reacting violently to alt-right provocation serves more to benefit its initiators than anyone else. The article was reprinted widely and read by more than a quarter of a million people. It’s shaping up to be another golden year for our faculty!