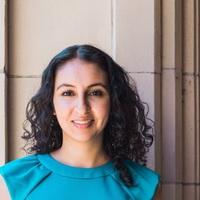 Arbella Bet-Shlimon, professor of the history of the modern Middle East, first joined the University of Washington in 2013 after receiving her PhD from Harvard in 2012. She decided she wanted to be a historian while completing an interdisciplinary master’s degree in Middle Eastern studies.

“I quickly realized that history was the approach I wanted to use to understand the Middle East, especially Iraq, and help others understand it too.”

Since coming to UW, Bet-Shlimon has helped hundreds of students gain a deeper understanding of the history of this region, which they often hear about only in sensationalized news stories, typically in the context of war and U.S. foreign policy. She has also shared her expertise with the wider UW community during public events such as the 2018 History Lecture Series, where she spoke about the history of Middle Eastern dissent in the context of the Arab Spring. In addition, she is an avid tweeter and has written for the Seattle Times.

Her research focuses on exploring “how communal identities, including nationalisms and ethnicities, develop and are developed by those who participate in them. I study how these phenomena are related not only to colonialism and nation building, but also to spatial and material forces.” Her first book, a history of Kirkuk, “uses the lens of urban growth and the oil industry to understand how the city of Kirkuk, Iraq’s longtime oil hub, became the site of a durable ethnic conflict.”

In 2017, she was presented with a UW Distinguished Teaching Award and says that some of her favorite memories are when “a student, or a public lecture attendee, has an ‘aha’  or lightbulb moment.” This is especially rewarding for a topic like the modern Middle East that is so often misunderstood and bound up in contemporary political discourse.

“Teaching the history of the modern Middle East is important because, I believe, it is the best way to dig into how problems like conflict in the region are actually provisional—that is, capable of being pinpointed to specific causes and analyzed, rather than inevitable and ‘too complicated’ to understand. A historical approach also illuminates aspects of society and culture that don’t necessarily have immediate practical applications to current problems, which humanizes the people of the Middle East because it allows us to resist reducing them to a ‘problem’ that needs to be solved.”