Course Spotlight: HSTCMP 313 Science in Civilization: Physics and Astrophysics Since 1850 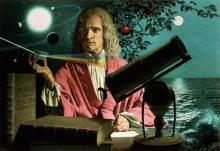 "How do you historicize gravity?"

This is just one of the exciting questions that undergraduates will get to tackle in Professor Bruce Hevly’s upcoming course HSTCMP 313: Science in Civilization: Physics and Astrophysics Since 1850.

Offered Winter 2018, the course starts in the nineteenth century and traces major shifts and developments in the two fields up to the 1980’s, with a focus on Western Europe. It begins at a time when enterprising individuals like Sir Isaac Newton were starting to ask new questions about the physical and natural world and when the study of physics was developing into a recognizable field of science. This history is followed through to the development of astrophysics and the study of astrological phenomena in the twentieth century (you know, space and all that awesome stuff!).

Physicists, scientists, and humanities students alike will find lots to enjoy in this class that offers far more than just facts and theories. They are there, of course, but are contextualized and embedded within the historical communities and cultures from which they sprang. You’ll not simply learn about the theory of magnetism, you’ll also explore the story of how and why it came to be. As Professor Hevly explains, this is of utmost importance, and perhaps the most exciting thing about this subject, because “to be able to understand the history of science is also to understand the modern world.”

We now take concepts like gravity and magnetism for granted, but this wasn’t always the case. When the course begins, "physics" didn’t even exist as a codified body of knowledge and most people had little to no sense of how and why natural forces operated as they did. Fast forward a few hundred years and they’re now able to measure the physical properties of stars (if they be so inclined)!

Just stop and think about that for a second. How did/could this happen? What encouraged people to try and measure the unknown? Why did theories develop at certain times and in particular historical places? Why were some more influential than others? And what impact did these new branches of science have on how people viewed the world around them? What were they able to see/understand that they couldn’t previously?

If you take this course you can find out!

Moreover, through this dive into the processes that have shaped our understanding of the world, students will also be challenged to think about their own perceptions of it. Historicizing concepts so familiar to us, like gravity, leads to a better understanding of the paradigms we live and operate within, which in turn allows us to be more thoughtful and critical of them. How do you think your point of view might change if you had no sense of gravity? And how might the fact that you know it exists change your point of view? One of the most famous names you’ll come across in this course, Sir Albert Einstein, once said that “few people are capable of expressing with equanimity opinions which differ from the prejudices of their social environment. Most people are even incapable of forming such opinions.” By breaking down and exploring the paradigms of different eras this course will teach students how to think outside of themselves.

Historical training doesn't get much better than that! If you can successfully historicize something as empirical as gravity you’re well set to tackle a whole host of historical problems!

Lectures for HSTCMP 313: Science in Civilization: Physics and Astrophysics Since 1850 will take place Mondays and Wednesdays 12:30-2:20pm. Look for it in our Winter 2018 Upcoming Courses.