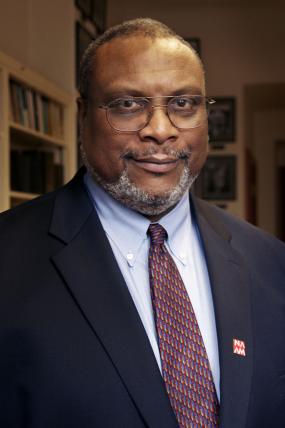 Professor Emeritus Quintard Taylor has been awarded the 2017 Robert Gray Medal by the Washington State Historical Society. The prestigious prize is given in recognition of Taylor’s distinguished career as a professor of history and his far-reaching commitment to researching, preserving, and promoting the history of African Americans in the Pacific Northwest.

First presented in 1968, the Robert Gray Medal is the highest honor bestowed by the Washington State Historical Society. It recognizes distinguished and long-term contributions to Pacific Northwest history through demonstrated excellence in one or more of the following areas: teaching, writing, research, historic preservation, and service to local historical societies.

Taylor is the author of over fifty articles. His work on African American Western History, African American, African, Afro-Brazilian, and comparative ethnic history has appeared in the Western Historical Quarterly, Pacific Historical Review, Oregon Historical Quarterly, The Annals of the American Academy of Political and Social Science, Journal of Negro History, Arizona and the West, Western Journal of Black Studies, Polish-American Studies, and the Journal of Ethnic Studies, among other journals.

In 2004, he created an online website resource center for African American history now called BlackPast.org (www.blackpast.org). It includes over 3,000 pages of information with contributions by over 400 scholars. Millions of people from around the world visit the site each year, making it one of the leading global resources for the study of African American history.

Taylor has been very active in supporting public and community history in Seattle and the Pacific Northwest. His board memberships have included: HistoryLink, the Northwest African American Museum, and the Idaho Black History Museum. He was also a founding member of the Central District Forum for Arts and Ideas.

The awards ceremony will take place during the annual meeting of the Washington State Historical Society on Saturday, September 23, at noon.