Antiquity, Empires, Artifacts, and Archaeologists Come Together in a New Summer Course 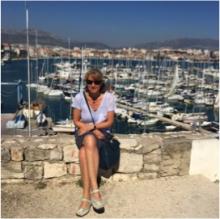 This summer, PhD Candidate Arna Elezovic will be offering a new course HSTCMP 290 "Indiana Jones and Archaeology in the Mediterranean World." The course is Elezovic’s way of blending two of her favorite areas of study: the ancient Mediterranean world and modern Europe. Classes that cover two such disparate eras are few and far between, so this is a great opportunity to learn about each region and period in history.

How did Elezovic become interested in this topic? In her words, "I have family in Croatia and lived there for a time, where Roman ruins are everywhere. Plus, my first PhD field was on the history of archaeology, meaning I have read far too much theory! So designing this class was a fun project for me, because it is a series of case studies where I'm using an idea (from one scholar I admire) that material and archaeological remains are "archives of memory.'"

Assignments for the course are quite varied and include: a 3-page book review essay, an exam, a 5-page essay with a historical fiction option, and a presentation with creative options. There will also be a visit with an Egyptologist/digital historian.

As to the title of the course and its emphasis on the fictional figure of Indiana Jones, Elezovic explains that, “we'll be analyzing clips from the films to get at the themes of imperialism, appropriation of ancient past for Western European national agendas, and sometimes just outright theft or destruction of priceless cultural artifacts. In fact, the issue of whether or not Western European museums should return objects to their countries of origin remains a subject of heated debate.”

Elezovic’s own research is also quite interesting. It focuses on the British archaeologist Sir Arthur Evans, who discovered a "lost" civilization on the island of Crete, which he dated from about 3,000-1,500 BCE and named after the mythical King Minos. Evans, who excavated at Knossos from 1900-1931, owned the land outright and reconstructed the site in 1920s Art Deco style. So using Evans's work as a frame or lens, Elezovic will “examine the idea of ‘imagined pasts.’” She also hopes to connect his more widely known career as an archaeologist with his lesser known work as a journalist in the Slavic Balkans.

So, if a course that examines Antiquity, Empires, Artifacts, and Archaeologists sounds appealing, check out HSTCMP 290 this summer!