Amanda Morse: Finding Out Where History Can Take You 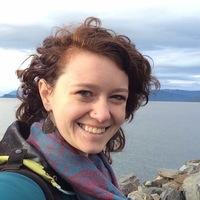 So just what is the point in getting a history degree? Amanda Morse faced this question for herself in 2009. Following a lifelong interest in Latin and the classical era, Morse had entered UW in 2005 seeking a history degree, with an emphasis on ancient Greece and Rome. Now, four years later, she was only a few credits short of graduation, but found herself dismayed at the challenging prospect of building a career as a historian of antiquity. Wondering whether it had all been for nothing, Morse dropped out of school to take stock of her talents and contemplate her future.

Five years later, Morse returned to UW and tackled her studies with renewed confidence and determination. She earned her BA in History in 2014, with minors in classical history and classical studies; and along the way she found that her degree work was steering her toward a new career trajectory in science and public health. "You might say history set me on the serpentine path to my professional calling," she recalls. "I wrote my senior seminar paper on classical conceptions of female reproductive health. After graduation, that experience encouraged me to take a job in Jakarta, where I worked on a USAID-sponsored project writing a handbook on women's health. And that, in turn, gave me a firsthand look at how important and exciting it could be to make a career in the field of public health."

Morse came back to the UW for a Master of Public Health, and discovered other reasons to appreciate both the breadth and depth of her historical training as well. "I may have focused on classical history," she notes, "but when it came time to do my MPH research in Bangladesh I drew heavily on two courses I had taken at UW from [Professor] Purnima Dhavan, particularly one on environmental history. I could not have made sense of the present-day political and social conditions I encountered without understanding the environmental impacts of events that occurred in South Asia centuries ago."

With her MPH completed, Morse now works at the Washington State Department of Health's Office of Communicable Disease Epidemiology. There she manages the Rapid Health Information Network's legislative agenda, and works with local health jurisdictions and other public health agencies to use the extensive epidemiological data that the network maintains. "Our systems correlate data from emergency department, urgent-care and primary-care visits, with other data sources such as school absenteeism and weather conditions. We work to not only track and respond to communicable diseases, but also to tackle public health issues such as traffic safety, drug overdoses, and asthma. Our systems and datasets allow us to test hypotheses and develop very sophisticated interventions."

Such duties might seem far from the field of history, but Morse finds daily value in her humanities degree. "History taught me to read both well and quickly; to write in a way that is clear, concise, and accessible to a non-expert audience; to look at all sides of an issue, reach a conclusion, and defend it persuasively. Most of all, it taught me to take on a task from start to finish: to find the necessary information, take in and process that information, and turn it into action." Morse also continues to draw inspiration from some of the strong female role models she encountered in the Department of History. "[Professor Emeritus] Carol Thomas was an incredible mentor. She never compromised her standards with me, but she was always willing to sit down, talk through ideas and help me develop my skills. Moreover, her professionalism and fearlessness have informed how I approach my life as both a scientist and a mother."

Sometimes family members ask Morse whether she regrets having spent time on a history degree before going on to public policy and science. "I tell them no," she says, "I could not do the things I do now so well if I hadn't had that foundation to build on." In the end, her only regret is that she didn't sooner recognize all the places history could take her. "If I could talk to my 2009 self, I'd say 'It's OK to be a history major and not become a historian?the skills you are learning will serve you well, wherever you want to go.'"