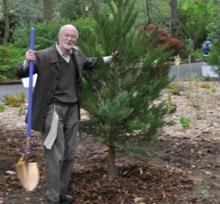 This year, the Department of History is honoring Professor Richard Johnson, who is retiring after forty-four years at the University of Washington. One of our department's many recipients of a Distinguished Teaching Award, Professor Johnson taught early American history. Professor Johnson spent his career focused on training students how to be historians. "I am interested in conveying history as a discipline, as a method of argument, not as a rote memorization of facts and dates," he stated. When discussing why undergraduate education was so important, Professor Johnson pointed to a drawer filled to capacity with notecards. Each notecard represents a student who has passed through one of Professor Johnson's seminars, a student to whom he taught critical thinking skills, which, he argues, are useful far beyond the boundaries of the. Also dedicated to graduate teaching, Professor Johnson is particularly proud that, during his tenure as department chair in the 1990s, he created the History 570-571 courses, in which graduate students learn to be good teachers and to prepare for a life in academics. The department recently honored Professor Johnson for his dedication with a tree planting ceremony, behind Smith Hall. A sequoia tree stands in honor of his numerous contributions to the university and greater community. Appropriately, this tree stands not far from that of Edmund Meany, a role model of his. Professor Johnson's expertise and dedication will be sorely missed, and we wish him the best of luck in his future endeavors.