Can't Hold Him Back: From radical youth to senior statesman, Larry Gossett is an activist for us all 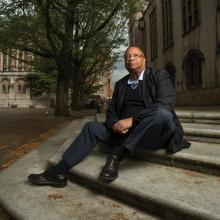 The Alumnus Summa Laude Dignatus is the highest honor bestowed upon a UW graduate and is presented annually by the UW and the UW Alumni Association. It recognizes a legacy of achievement and service built over its lifetime. More than 70 alumni who personify the University’s tradition of excellence have received this prestigious honor since the award was inaugurated in 1938. The list includes Nobel Prize winners, internationally recognized scientists, artists, business leaders, educators and many other influential figures.

You can’t really talk about the UW in the 1960s without mention of Larry Gossett. A student activist who helped organize the Black Student Union on campus, he formed tight bonds with his classmates and sparked a massive effort to make the University more diverse.

Gossett ranks among Edmond Meany (class of 1885), Trevor Kincaid (class of 1899 and 1901) and Bill Gates Sr (class of 1949 and 1950) as alumni who transformed the University for generations to come. While his predecessors established the campus, founded the zoology department and a research station, and drove innovation and public service law, Gossett and a small group of fellow students motivated the UW to expand its curriculum and recruit and support first-generation students and students of color. They also prompted the school to hire more faculty of color. The results of their activism enriched the college experience for everyone, not just underrepresented and economically challenged students.

But that’s just part of why Larry Gossett is this year’s Alumnus Summa Laude Dignatus (alumnus most worthy of praise), the highest honor the UW confers on its alumni.