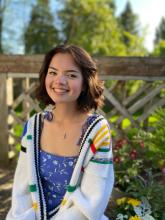 Melinda Whalen, a sophomore History and Russian major, won a prestigious Foreign Language and Area Studies (FLAS) Fellowship to advance Russian language skills and conduct a Soviet history research project in the 2021-2022 academic year. She is also the 2021 History Department nominee for the Burton College of Arts and Sciences Social Sciences Scholarship.

Driven by a keen interest in Soviet history, Melinda enrolled in Russian 101 at the beginning of her sophomore year. The FLAS award not only came in recognition of her exceptional academic achievement, but also would boost her morale to master the Russian language. “My goal is to have a strong enough command of Russian to be able to analyze Soviet-era primary sources in their original language for my historical research,” said Melinda.

Entering the UW as a graphic design major, Melinda switched to History after taking her first college history course in the freshman year. The class that catalyzed her transition was HSTCMP 340, The Cold War: Realities, Myths, Legacies, taught by Dr. Kyle Haddad-Fonda in Autumn 2019. “I originally registered the class only as a ‘credit filler,” said Melinda, “but after sitting in just a few lectures and participating in the class discussions, I quickly realized that history is what I wanted to pursue as a major.”

“Prof. Haddad-Fonda is an amazing teacher—I always enjoy his lectures and the way he structures his classes and initiates thought-provoking discussions,” added Melinda. “I always credit him with opening the door to historical research for me.” In the spring quarter of 2020, Melinda took another course taught by Kyle—HSTAFM 278 Modern North Africa.

In the eyes of Dr. Haddad-Fonda, Melinda showed an impressive amount of enthusiasm and determination. “She approached every reading with confidence, chose the trickiest essay prompts on take-home exams, and wrote with clear and incisive prose.” “None of my students is more committed to the major, and none has expressed more heartfelt glee at the opportunity to learn,” he added.

Through the Cold War class, Melinda found not only her passion for history, but more specifically her scholarly interest in Soviet history. “I remember how intrigued she was by our discussions of Joseph Stalin in my Cold War course. She told me before the end of that first quarter that she intended to study Russian,” explained Kyle. At the time, Melinda told Kyle that her goal was to “learn Russian well enough to be able to use Soviet-era films and art as sources for a senior thesis that will focus on Soviet depictions of war and immigration.”

“I get a chuckle out of Melinda’s interest in art and film—the subtlest little reminder of her otherwise forgotten origins as a graphic design major,” said Kyle.

A graduate of Inglemoor High School in Kenmore, WA, Melinda recalls that her school offered a vibrant atmosphere for foreign language learning. Multiple language classes were available, among which she took Chinese from ninth to twelfth grade. “I liked the feeling of learning a new language, and now it’s truly so much fun to study Russian.”

Ms. Tracy Morrissey, Director of Academic Services, has also been extremely helpful and encouraging to Melinda. “Tracy is always happy to answer my endless stream of questions and give me advice on anything.” Knowing Melinda’s interest in Russian history, Tracy introduced her to Prof. Glennys Young.

This summer, Melinda will conduct an honors history project about poetry and Russian nationalism under the guidance of Prof. Young. “I can't wait to start using Soviet-era films and art as primary sources for my research project. I can't understand them without translations just yet but I'll get there!”

After securing a FLAS fellowship, Melinda now turns her eyes to other major grants, including the Fulbright and the CLS (Critical Language Scholarship). Speaking of her visions for the future, Melinda said she might consider a gap year after graduation for traveling and language learning in Russia. “I am really excited about beginning my own research, I'm planning to apply to grad school after studying abroad and pursuing my PhD in Soviet history."