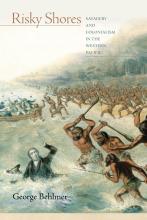 Professor George Behlmer's recent monograph, Risky Shores: Savagery and Colonialism in the Western Pacific (Standford University Press, 2018), receives a featured review in the June 2020 issue of the American Historical Review . The book is co-winner of the 2019 Stansky Book Prize, sponsored by the North American Conference on British Studies (NACBS).

"Risky Shores: Savagery and Colonialism in the Western Pacific, George K. Behlmer tells us at the very beginning, in the first paragraph of the acknowledgments, is a study of the encounters between Europeans and indigenous peoples in the Western Pacific, and the risks involved for both sides. A question at the core of the study is how “white strangers and dark ‘savages’” understood these risks (xiii). The introduction makes it clear, however, that the book’s attention will be more on the strangers’ than Islanders’ agency and perspectives, though the latter will be included where “the evidence—written, spoken, or inferred—permits” (13). In large part, the book will be about “savage talk,” considering the ways in which Anglophone visitors—Britons, Americans, and Australians—have observed, understood, and characterized the indigenous cultures of the Western Pacific."

Read the rest of this featured review at AHR =>