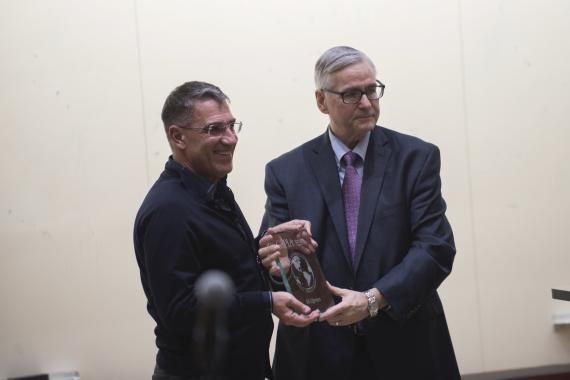 The History faculty prides itself on the excellence of its mentorship. Department alumni carry that ambition with them. Ali Iğmen (PhD, UW, 2004), professor of history at California State University, Long Beach, recently received an International Public Service Award from the University of Pittsburgh Graduate School of Public and International Affairs for his work as a mentor to international scholars.

A historian of Soviet culture and gender politics in Central Eurasia, Iğmen’s main goal as a mentor is to be an activist. He sees this goal as united with his work as a historian who supports marginalized groups, including he notes include “women in Soviet Theatre in Central Asia, and various smaller ethnic groups whose achievements in cultural and educational fields have been ignored by historians.”

UW History: What do you see as the highlights of your work in public service and as a mentor?

Ali Iğmen: I have hosted and mentored six master’s and doctoral students from Central Asia and the Caucasus during the last ten years (four scholars from Kyrgyzstan, one from Uzbekistan, and one from Georgia), sponsored by the Junior Faculty Development Program of the U.S. State Department and the Open Society Foundations. I also work with American and other students (doctoral students outside of my university as a committee member—we do not have doctoral programs) who study Central Asia. I work with doctoral students and new faculty who work on connecting Central Eurasian history and literatures (interdisciplinary workshops in the American University of Central Asia in Bishkek, Kyrgyzstan). Finally, I conduct workshops for Central Asian faculty to teach interdisciplinary Silk Roads courses.

UW History: You have taught at institutions in Kyrgyzstan, Turkey, and the United States. How has that experience informed your approach to international public service?

AI: These diverse teaching experiences helped me work with students who learn in a variety of ways. Students in Kyrgyzstan, for example, are used to passive classroom listening, while American students prefer interactive methods, and students in Turkey expect more mentoring, informal and formal, from their instructors. As I was challenged to work with such varied student needs, I learned to apply those experiences in my workshops with international students and new faculty members.

Iğmen shares that his research always informs his teaching because he specializes in oral history methods, conducting interviews with teachers, actors, theatre professionals, and administrators of cultural organizations in Central Asia. “These types of direct contact with individuals help me connect better with my students,” he concludes.