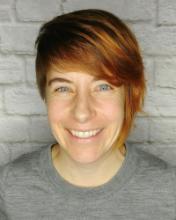 Big congratulations to the Department of History’s’ Laurie Marhoefer whose article, “How should we protest neo-Nazis? Lessons from German History,” was recently chosen by editors and readers of the independent news website, The Conversation US, as their most memorable piece of 2017.

In this thought provoking article professor Marhoefer brings her experience as a historian of Weimar and Nazi Germany to bear on current issues surrounding the rise of neo-Nazism in today’s fractured America - specifically how to best confront and tackle the issue. She concludes, that whilst tempting, the history of The Third Reich teaches us that reacting violently to alt-right provocation serves more to benefit them than anyone else.

The article was one of the most read on the site during the year and beat out more than 1,700 pieces from fellow academics to take the top prize.

On January 17th, Professor Marhoefer will be tackling similar issues and themes in her talk, “Popular Protest in Nazi Germany: Rethinking the Power of Public Opinion in a Police State,”part of the upcoming History Lecture Series. This talk will focus on some of the more successful forms of public protest and dissent that managed to flourish even in the most authoritarian of regimes.

Don’t miss this great opportunity to learn from our award-winning faculty! Get your tickets here.