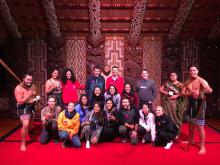 For Early Fall Start 2017, I ventured to New Zealand with 15 students and 2 UW faculty to study the Māori, their sovereignty and environments, and how these are represented. After having time to reflect, I know how this trip has changed my mentality, values, and overall identity. Through various museum trips, cultural encounters, and group discussions, the class recognized the constant effort needed to decolonize government institutions, common discourses, and societal perspectives that perpetuate the systematic marginalization of Indigenous peoples.

While we spent our time studying the Māori, their circumstances, and the history that has caused this, we bonded through the hours of travel. For example, we took the scenic route to Wellington aboard the Northern Explorer for a ten-hour train ride. We traveled through tunnels, in the shadow of a mountain, and beside small industrial towns; all the while, we ate, listened to music, talked, and most importantly, slept. Or, on our bus trip from Auckland to the Bay of Islands, we played verbal games that left us all laughing. It was amazing and life changing to be placed in such a cultural immersion with a group of people who were all experiencing this for the first time together. Our class learned to depend on each other and use everyone’s different perspectives to critically analyze the range of narratives that we encountered while traveling throughout the north island.

To provide context, we were in New Zealand, known as Aotearoa to the Māori, to specifically learn about the Treaty of Waitangi between the Māori and European settlers, established in 1840. Throughout this trip, we learned the effects of having two separate founding national documents; the Māori’s version of the Treaty, in their language of Te Reo, is a completely separate piece of work when compared to the British version. This inevitably caused disparities and intergenerational traumas as the British version of the Treaty coerced the state’s development by cementing settler’s needs and values into the nation’s identity. The Māori peoples had agreed to a mutually beneficial partnership outlined in their Te Reo Treaty, but due to the British version, the British were able to “buy” Aotearoa’s lands and level them in order to make space for agrarian traditions and the settlers, thus marginalizing the Māori.

Whether it was with bus, train, or plane I was reminded of the Māori’s fight for sovereignty and recognition as I looked out onto lands that the government took with unjust methods such as confiscation or purchasing land under value. However, despite the seemingly negative situation, we saw how the Māori people have continued to adapt to their circumstances in order to persevere and thrive.  For example, Māori peoples have adopted animal agriculture to take part in the lucrative business that dominates New Zealand’s geography. This idea of adaption was discussed while in Auckland at the Tikanga Rangahau Wananga conference we attended. We were able to hear from Professor Linda Tuhiwai Smith, a Māori scholar. She gave us a unique experience by giving her lecture through stories. In doing so, she personified her culture’s practices as she spoke of resistance and remaining firm in their identity. One story in particular stuck out in a poem-like tale called “You Can’t Erase Me” that retold a conversation between herself and another scholar. The exchange ended as her colleague stated, “You are here because of race, I’m here because of merit.” Her response silenced the audience, influenced our class, and reaffirmed the intensity of Māori determination and unwillingness to be disregarded by settler colonialism: “No, you’re here because of race, I’m here because you can’t erase me.”