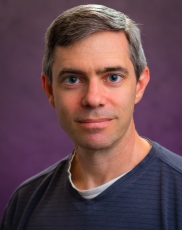 It is not every day that you meet someone who has a PhD in history; speaks Russian fluently; creates maps using a geographic information system (GIS); troubleshoots computer hardware; and develops websites. Yet, luckily for the Department of History, our new director of technical services, Eric Johnson, is all this and more.

Johnson, who received his PhD in Russian history from the UW this spring, will be bringing this unique skill set to the department with the goal of cementing the university’s position as a center of digital history and scholarship. In his role, Johnson will also provide support for technology adoption in the classroom, not only as a teaching tool, but also as a means for students to build their own digital portfolios. According to him, “Digital history does not supplant more traditional forms of analysis and communication, but it can open up new windows that we have never had access to before. This is true for historical research, but it also applies to the ways we convey and learn history, whether as a teacher, a student, or just an educated citizen.”

Johnson became interested in technology at a young age. Beginning in middle school, he regularly checked out computer programming books from the library. He would “think up code” in his head, and remembered, “I was terribly excited about the possibilities for computing, especially simulation, analysis and artificial intelligence. So I guess my brain has some natural affinity for the way computers work.”

As an undergraduate at Rice University in Texas, Johnson was torn between the social sciences and his interest in computers. He ultimately decided to major in computer science, while taking a host of history and political science courses. After sixteen years in the technology field, he was ready for a change, and decided to pursue a graduate degree in the social sciences. The history of Russia quickly became his focus. “I was especially fascinated by Russia's cultural and religious diversity, especially the rather unique experiences of its large Muslim population,” he said. “If you want the chance to explore the extremes of human politics, culture, and experience, most of them can be found in Russia's past. It's been a happy decision.”

Johnson has successfully meshed his technical and historical expertise to create an innovative interactive map of early nineteenth-century Kazan, the capital and largest city of the Republic of Tatarstan. The map, which he created using tax records and vintage maps, allows users to explore the geography and social and religious structures of the city. Johnson hopes to make the map public, so that it can be used as a teaching and research tool for those interested in urban, Russian, and nineteenth-century history.

Johnson is also a member of the Department’s Digital History Committee. For more on digital history at UW, visit https://history.washington.edu/digital-history.