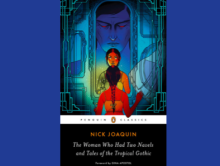 Professor Vicente Rafael recently curated and wrote the introduction to a collection of short stories and a play by the highly regarded Anglophone Filipino writer Nick Joaquin. The collection, which is entitled The Woman Who Had Two Navels and Tales of the Tropical Gothic, includes several of Joaquin’s better-known pieces, such as “May Day Eve” and “The Summer Solstice,” as well as lesser-known, but equally striking works, including “Doña Jeronima,” “Three Generations,” and “Guardia de Honor.”

A recent review on National Public Radio by writer Genevieve Valentine described Joaquin’s work as “a transporting read, and a fierce elegy for a past that never was.” The release is especially significant because it both recognizes the centennial of Joaquin’s birth and marks the first time a collection of his writings has been available in the United States.

Learn more about the collection, which was published by Penguin Random House, here.