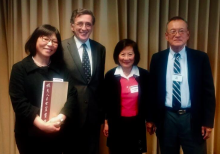 Professor Jordanna Bailkin received a Society of Scholars Fellowship at the Walter Chapin Simpson Center for the Humanities for 2017-18.

Professor Arbella Bet-Shlimon received the UW Distinguished Teaching Award. She is one of only seven faculty members across all three campuses to be recognized with the honor.

Professor Madeleine Dong (at left) was awarded the Vincent Y.C. Shih Professorship in China Studies in October 2016. A ceremony to mark the recognition took place in April 2017. Vincent Shih taught at the UW from the mid-1940s to the 1970s. Learn more about Professor Shih and the award.

Professor Christoph Giebel is currently preparing for his 12th study abroad program in Viet Nam since 1999.

Professor Kazumi Hasegawa had her article entitled, "Resurrection of a Premodern Hero: The Debates over the Legends of Minamoto no Yoshitsune in Interwar/1920s-1940s Japan,” accepted for Radical History Review (Duke University Press, Issue 130). It will be published by January 2018.

Professor Linda Nash received a major grant from the National Endowment for the Humanities for research on her new project, "American Engineers and Hydroelectric Development Projects in the U.S. and Afghanistan." With the help of this funding, Nash seeks to examine how Americans’ approach to postwar development was shaped by the nation’s abundant resources and its history of settler colonialism in the American West.

Professor Vicente Rafael recently curated and wrote the introduction to a collection of short stories and a play by Nick Joaquin, the most highly regarded Anglophone Filipino writer, on the occasion of his birth centennial. The book is published by Penguin Classics, and represents the first time Joaquin's work has been made available to a larger Anglophone readership. An informative review of the book can be found here. Rafael also just published an essay, "Power, Play and Pedagogy: Reading the Early Horacio de la Costa, S.J.," in Reading Horacio De La Costa, SJ: Views from the 21st Century, edited by Soledad Reyes, Quezon City: Ateneo de Manila Univ. Press, 2017. He was also a recent recipient of the award for excellence in criticism in English from the Writers' Union of the Philippines (UMPIL, or Unyon ng mga Manunulat sa Pilipinas).

Professor Josh Reid has been awarded four major prizes for his book The Sea Is My Country: The Maritime World of the Makahs. These honors include the John C. Ewers Award for the Best Book in North American Indian ethnohistory, the Sally and Ken Owens Award given biennially for the best book on the history of the Pacific West, the John W. Caughey Book Prize given annually for the most distinguished book on the history of the American West, and the Erminie Wheeler-Voegelin prize from the American Society of Ethnohistory for the best book-length contribution to the field of ethnohistory. Professor Reid’s excellent book also received Honorable Mentions for the Frederick Jackson Turner Award and the John Lyman Book Award in U.S. Maritime History.

Professor William Rorabaugh participated in several events related to publication of his book, American Hippies. CSPAN-3 taped a lecture on the counterculture delivered during his course on the 1960s, as well as a panel on the same topic that Rorabaugh organized and chaired at the American Historical Association meeting in Denver. The BBC also filmed him for a documentary on the fiftieth anniversary of the Summer of Love in San Francisco.

Professor Benjamin Schmidt delivered the keynote address at the annual meeting of the Royal Netherlands Historical Society this year; and his recent book, Inventing Exoticism: Geography, Globalism, and Europe's Early Modern World, was named a finalist for the American Society for Eighteenth-Century Studies Kenshur Prize.

Professor Emeritus Quintard Taylor Jr received the Lifetime Achievement Award given by the Pacific Northwest Historians Guild at its annual meeting on April 27, 2017 at Seattle Pacific University. Other past department winners include Professor Robert Burke (1988) and Professor John Findlay (2012).

Professor Emeritus Carol Thomas is currently offering a course at the Osher Lifetime Learning Center called “Myth Becomes History." Over the past three years she has also participated – in a small way – with a Greek lawyer-poet in producing a new English translation of the poems of Cavafy. He has restored the essential element of rhythm/rhyme that is absent in most translations. In addition, Thomas, along with her co-author of four earlier books – Craig Conant, one of her first graduate students - have returned to a postponed manuscript that describes the rise of Classical Greece by recreating the lives of the poet Hesiod and his ne’er-do-well brother Perses. Hesiod’s words in “Works and Days” and “Theogony” mark the recovery of literacy in Greece and hence revival of knowledge of its history.

Professor Lynn Thomas is an organizer of an interdisciplinary team examining the use and equity of partnership-based structures in public health projects. The initiative, Humanistic Perspectives on Global Health Partnerships, is funded by the Walter Chapin Simpson Center for the Humanities. Professor Adam Warren is also participating in the unique effort. Learn more here.

Professor Adam Warren received a collaborative research grant from the American Council of Learned Societies (ACLS). Warren is joined on the project by Martha Few of Penn State and Zeb Tortorici of NYU. Their project is entitled "Postmortem Cesarean Operations and the Spread of Fetal Baptism in the Spanish and Portuguese Empires." In 2016, he also received a Short-Term Interdisciplinary Cluster Fellowship from the John Carter Brown Library for a smaller, related translation project entitled "On Cesarean Operations and Fetal Baptism: An Eighteenth-Century Guatemalan Treatise in Historical Perspective." The other recipients were Martha Few, Zeb Tortorici, and Nina Scott (U Mass. Amherst).

PhD Candidate Michael Aguirre received a full-year dissertation fellowship from the Center for Engaged Scholarship. His article "Excavating the Chicano Movement: Chicana Feminism, Mobilization, and Leadership at El Centro de la Raza, 1970-1975" will be included in the forthcoming work ¡Chicana Movidas!: Mapping Technologies of Resistance in the Movimiento Era, edited by Maylei Blackwell, María Eugenia Cotera, and Dionne Espinoza (Austin: University of Texas Press, 2017). His dissertation focuses on the relationship between political economy, labor, nationalism, and migration on the Mexico-United States borderlands in the later twentieth century.

PhD Candidate Ross Coen served as the Soden-Trueblood Graduate Publishing Fellow at UW Press, where he worked on manuscript acquisitions, the peer-review process, copy editing, and proofreading. Ross also published “Fish Is a Fighting Food: North American Canned Salmon and the First World War” in The Northern Review, an interdisciplinary journal of Yukon College in Whitehorse and presented “Trends in Historical Study of Alaska and the American Arctic” at the Western History Association in St. Paul, Minnesota, in October 2016.

PhD Candidate Emily Marie Anderson Hall presented at the 'History in Making' Conference in Montreal at Concordia University on April 1, 2017. The conference theme was "Parody, Protest or Performance? Mischief and Humor in History." Her paper was titled: “Ambiguity as Resistance: the Liminality of Humor within Kim Sŏnghwan’s ‘Mr. Kobau’ and the Rise of the Editorial Cartoon in South Korea (1955-1960).”

PhD Candidate Brad Horst received the Fritz Boeing Fellowship from the Graduate School for next year. He also had a paper accepted to the Central Eurasian Studies Society annual conference, taking place at UW, October 5-8, 2017. The title of the paper is "The Ethnographic Encounter in the East: Russian Colonial Knowledge and the Gendering of Bacha, 1870-1920," while the larger panel is entitled, 'Bacha and Beyond: Crossdressing and Gender Diversity in Central Asia.'

PhD Candidate Eric Johnson presented his paper “Seeking a Metaphor for Russianness: The Interplay of Local and National Identity in Mid-Nineteenth Century Kazan (1815-1861)” at the 48th Annual Association for Slavic, East European, and Eurasian Studies (ASEEES) Convention in Washington, D.C. (November 2016). He also received a Silk Road Research Grant from the Walter Chapin Simpson Center for the Humanities.

PhD Candidate Roneva Keel received a Sawyer Seminar Dissertation fellowship. The seminar, organized by the Washington Institute for the Study of Inequality and Race (WISIR), the Harry Bridges Center for Labor Studies, and the Simpson Center for the Humanities, will examine the relationship between race and capitalism through the historical case studies of the United States, the Philippines, Brazil, and South Africa.

PhD Candidate Shruti Patel, who will defend her dissertation in May 2017, has accepted a post-doctoral position at Gonzaga University in Spokane, Washington.

Doctoral Student Taylor Soja has been working at the Pacific Science Center (PSC) this year as a Public Communications Fellow. This has involved having conversations at the PSC with staff about communicating with the public about how the research process for history works, and developing her own skills for sharing work with the public in different types of settings. As a kind of final project, she has designed and presented on the history of map-making in the PSC using their Science on a Sphere technology.

Phd Candidate Rachel Taylor was offered a Summer Historian position with the National Park Service. She will be working with the Historic American Buildings Survey (HABS) on the boiler room and steam plant at the hospital on Ellis Island. She will be based in Washington, DC and will spend a couple of weeks on-site in New York.