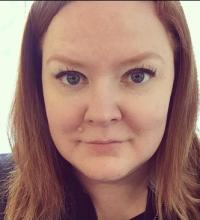 If asked the question "what can you do with a Bachelor's Degree in History?" history majors will provide many different answers. Recent graduate Josie Rollins' response to this question was to go to graduate school. A former recipient of the Department of History's Sleizer Scholarship and the Magna Carta Society Prize, Josie has decided to take what she learned at the UW and pursue an advanced degree. Now at Cambridge University in England, Josie is pursuing first an M.Phil, the British equivalent of an M.A., and then a Ph.D. While at the UW, Josie took as many history classes as she could, but found herself increasingly drawn to medieval history. Her favorite courses at the UW were Professor Charity Urbanski's Medieval England class and Professor Robin Stacey's Reacting to the Past. When asked why these classes were her favorites, Josie said "they challenged me to examine my assumptions about medieval history and see how many gaps there are in our knowledge about the period. I like the idea of participating in addressing those gaps." Josie is now specializing in medieval ecclesiastical and spiritual history, particularly 11th-13th century Ireland's female religious institutions and how they changed over time. In speaking about her experiences in UW's History Department, Josie said she had tons of support. "The positive support of the professors and the academic staff like Matt Erickson made it possible for me to pursue a Ph.D. I can't say enough good things about the department for supporting its students."