Faculty History: Giovanni Costigan and the Red Scare on Campus 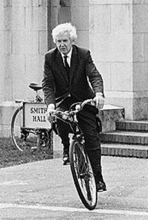 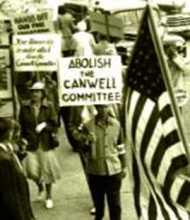 In 1948, History Professor Giovanni Costigan was one of forty UW professors investigated, and eleven subpoenaed to appear before Washington State's Joint Legislative Fact-Finding Committee on Un-American Activities, more popularly known as the Canwell Commission. Costigan came into the committee's crosshairs for his outspoken support of the Loyalists during the Spanish Civil War of the 1930s, along with Canwell's personal belief that the professor was a member of the Communist Party.

After giving his testimony, Costigan was not singled out for further disciplinary action, and emerged from the Canwell Commission relatively unscathed. Three of his colleagues, however, were less fortunate. Ralph Gundlach, Joseph Butterworth and Herbert Phillips were fired by the university after the committee ruled that they had been part of the Communist Party.

The Canwell Commission was not Costigan's last run-in with the far right. In 1961, the radical anti-Communist John Birch society published a "fact sheet" on the UW professor charging him with, among other things, supporting the Spanish Republic, belonging to the ACLU, and opposing Senator Joseph McCarthy.

In 1971, Costigan's politics again came to center stage, when he debated noted conservative author and founder of National Review magazine William F. Buckley Jr., on the topic of US foreign policy in Asia. More than 8,000 people packed Hec Edmundson Pavilion for over three hours while the two sparred.

Though Costigan ruffled the feathers of conservatives throughout his career, he is remembered more as a passionate and dedicated teacher, than political provocateur. In 1970 he won the first-ever UW Alumni Association Distinguished Teaching Award. One of his former students said, "Costigan made history come alive by giving us modern parallels, often in pithy asides, for what had taken place in the past. What impressed me as much as his magnificent lectures was the genuine concern he had for his students. Somehow he had time for every one of us, and he listened."

In April 1975, when Costigan reached the then-mandatory retirement age of 70 and was forced to resign, history students, inspired by his teaching, formed the "Committee to Retain Giovanni Costigan." While he was not allowed to return to the department, he continued teaching classes as an independent scholar for the UW Alumni Association.