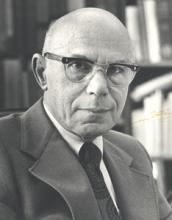 In 1936, the department hired one of its most distinguished and well-known professors, Solomon Katz. In his more than fifty years with the department, Katz became one of the most popular lecturers on campus, while making an academic impact with his study of Byzantine history. He helped develop courses on the Byzantine Empire for the department, making UW one of the first colleges to offer students the opportunity to learn about that important time and place. At the same time, Katz helped to bring several Byzantine collections to the UW Libraries, many of which are still used by scholars today.

In 1978 the university established the Solomon Katz Distinguished Lectureship Series in the Humanities and created an endowed professorship in honor of this noted and popular historian. The lecture series is still active today, and has hosted many renounded and distinguished scholars.

Katz's contributions were not limited to the Department of History. He was also a committed civic activist and served on the boards of the Seattle Repertory Theater, the Seattle Art Museum, and the Seattle Symphony.