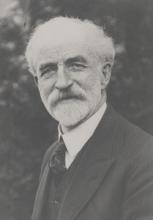 In 1894, Edmond S. Meany became the first history professor at UW, a position he held while simultaneously serving as the university's first registrar and secretary to the Board of Regents. Although Meany's formal training was in biology, he had a particular interest in local history, and he taught courses on Northwest history and Northwest Indians alongside general American history courses.

Meany was an important figure outside the university as well. He served as the editor and publisher of the Seattle Post-Intelligencer, and as a state legislator in 1891 and 1893.