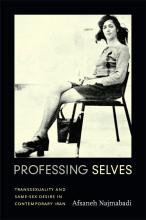 Professor Afsaneh Najmabadi will present a public lecture on transsexuality in Iran on Wednesday, January 15th at 7:00 pm in Smith 205. This lecture, hosted by the Department of History, is part of the Earl & Edna Stice Memorial Lectureship in the Social Sciences.

Professor Najmabadi is the Francis Lee Higginson Professor of History and of Studies of Women, Gender, and Sexuality at Harvard University. She has recently completed Professing Selves: Transsexuality and Same-Sex Desire in Contemporary Iran (Duke University Press, 2013).

Since the mid-1980s, the Islamic Republic of Iran has permitted, and partially subsidized, sex reassignment surgery. In Professing Selves, Afsaneh Najmabadi explores the meaning of transsexuality in contemporary Iran. Combining historical and ethnographic research, she describes how, in the postrevolutionary era, the domains of law, psychology and psychiatry, Islamic jurisprudence, and biomedicine became invested in distinguishing between the acceptable "true" transsexual and other categories of identification, notably the "true" homosexual, an unacceptable category of existence in Iran. Najmabadi argues that this collaboration among medical authorities, specialized clerics, and state officials—which made transsexuality a legally tolerated, if not exactly celebrated, category of being—grew out of Iran's particular experience of Islamicized modernity. Paradoxically, state regulation has produced new spaces for non-normative living in Iran, since determining who is genuinely "trans" depends largely on the stories that people choose to tell, on the selves that they profess.

In addition, Professor Najmabadi leads a digital archive and website on Women's Worlds in Qajar Iran. The project was recently awarded its second two-year grant from the National Endowment for the Humanities and was recognized by the White House Office of Public Engagement in May of 2012.

In addition to her public lecture, Professor Najmabadi's visit will include a colloquium for faculty and graduate students on women in Qajar Iran and the digital humanities. The departmental colloquium, entitled "Writing History in a Digital Age," will take place on Tuesday, January 14th, at 2:30 pm in Smith 306 with a reception to follow.