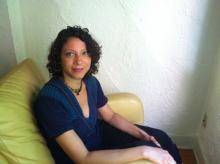 Professor Stephanie Camp was an historian of African Americans, slavery, the American South and women and gender. She taught classes on slavery in the United States, nineteenth- century America, African Americans and beauty and the body.

Q: Why did you decide to become an historian? Were there family influences, inspiring books, influential teachers, or other factors that influenced your decision?

SC: I have always wanted to write stories. I think my earliest awareness of this desire came in the third grade when, unfortunately, my teacher accused me of plagiarizing the children's author Judy Blume's style, which would have been a rather sophisticated crime for an eight-year-old. Perversely, I became quite proud of myself during that episode. In junior high and high school, I continued to write short stories and imagined that I would write one day, and journalism was the dream. However, in college I met Evelyn Brooks Higginbotham, then a professor in the History department at Penn. She was a black woman--one of the few in the academy at the time--and she made it a point to encourage undergraduate students of color to go to graduate school. I am one of many scholars around the country who are here because Evelyn plucked us from our cluelessness and aimed us toward grad school. I was not a History major in undergrad, and it took me a few years to find my way to it. But I was drawn to the possibilities for storytelling and also to its rigor and discipline.

Q: Can you tell us a little about your current research and how you became interested in the topic?

SC: I am working on a history of the idea of black beauty. I look at how Europeans, white Americans and black Americans have debated if black bodies can be beautiful (or not) and what was significant about the answers to that question. One major force that brought me to this topic was the Modern Girl Around the World Research Project a collaborative research project by a number of our colleagues in History, English and Gender, Women and Sexuality Studies. Their articles, presentations and book really inspired me to think about beauty historically. In particular, Lynn M. Thomas, our current Chair, would pass me articles and books to read that she found to be really exciting, and I read them. I found them exciting, too. But I also found myself asking about the deeper history: so much of the scholarship on beauty and race seemed to be about the 20th century. But as a historian of slavery, I knew that many of the ideas that shaped racialized ideas in the 20th century had much deeper roots. So I became interested in finding out where the "problem" of black beauty started and how it changed over time. Why did black people even have to declare in the 1960s and 1970s that black was beautiful? When did we start to doubt that? Why, exactly? Did everyone agree?

Q: What do you find most challenging about this type of research?

Well, right now my challenge is working with 20th-century sources. Sources for the work I've done in the past (on enslaved woman in the 19th-century South), and even the research I did for the early modern chapters of my current project on beauty, was akin to searching for the golden ticket folded inside hundreds of chocolate bars. That is not the challenge of working with printed material in the middle of the 20th century. So I am trying to learn how to carefully curate what I look at--to make very considered choices about what I read. With older printed matter or with plantation manuscripts, I tended to read ambitiously, search carefully and come up with a few golden tickets that allow you to tour the chocolate factory. In the mid-20th century, the chocolate factory was open to all--the public sphere was so accessible and vibrant and prolific.

Q: Does this research intersect with your teaching? Has it inspired ideas for new courses?

As a result of doing this research, I took over a class created by our former colleague Uta Poiger called "Beauty and the Body." I teach it as a Discovery Seminar for freshmen and as a Junior seminar for our majors. I just love this class because it is so meaningful for the students who choose to enroll in it. Young people today face stupefying amounts of messaging and pressures about their bodies. It's great to be able to pause, read intensively, and sit around a table and talk about the histories of the cult of the body beautiful and hopefully dismantle the ideals a bit. The class is also fun--we laugh a lot, which is refreshing since so much of human history doesn't necessarily give us all that much to laugh about.