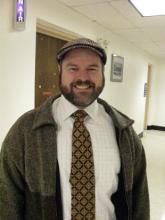 Ross Coen is a second-year Ph.D. student in the History Department where he is studying the 20th century American West, in particular the intersections of environment, technology, and politics in Alaska fisheries. Before coming to UW, he worked on climate change policy in the office of Senator Ted Stevens and on rural energy development for the Alaska Center for Energy and Power (ACEP), an applied research institute at the University of Alaska Fairbanks.

Coen's 2012 book, Breaking Ice for Arctic Oil (University of Alaska Press), examines the political and technological history of the SS Manhattan, an icebreaking tanker that transited the Northwest Passage in 1969 in order to test the viability of shipping Alaska North Slope crude oil via circumpolar marine routes. Based on his Masters thesis, the book project was supported by fellowships from the Center for Global Change, Association of Canadian Universities for Northern Studies, University of Alaska Foundation, and the Arctic Research Consortium of the United States. In summer 2013, he returned to ACEP in Fairbanks to research the long-term influence of technological innovation on the lifespan of Alaska oil fields.